Video of this song from youtube
Average Rating : 4.16
Total Vote(s) : 254
Please rate this song between 1 star and 5 stars (5 stars being the best). Just move your mouse on the stars above and click as per your rating. Your rating will really help us to improve our website. 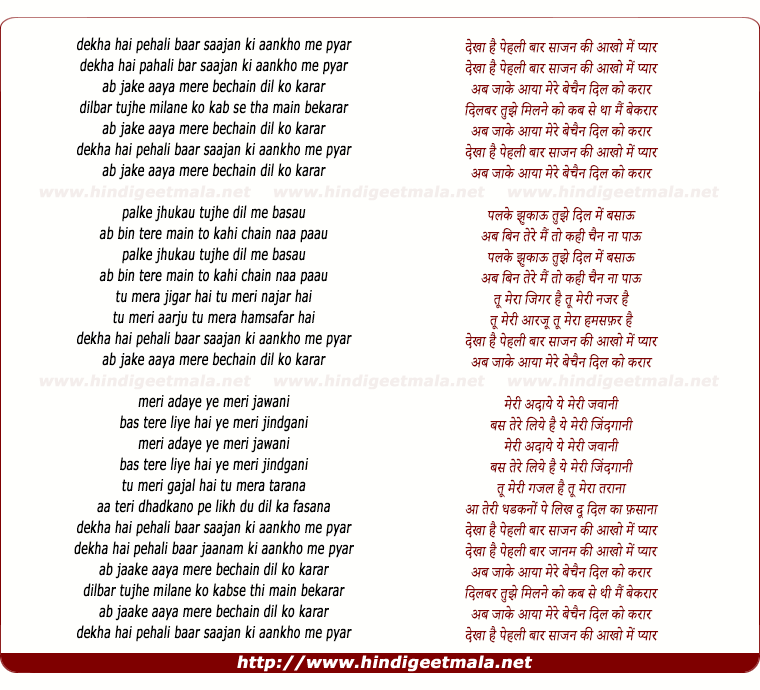 Comments on song "Dekha Hai Pehalee Baar"
rajnikantsharma on Tuesday, November 10, 2009
Nadeem & Shravan had their golden moments but then they started signing too many movies and their music became predictable and stale. I also think they should have moved away from Kumar Sanu who lost his voice after Ashiqui and sounded constipated thereafter.
nazm01 on Thursday, June 11, 2009
Aah the good times. When life was good and it was an honour to watch a bollywood movie and not a neccessity. They just don't make songs or movies like this anymore. What has happened to the culture in Bollywood? Surely it does not portray India today?
NMbarrassment on Tuesday, December 01, 2009
This song is a classic, but I never knew what movie it was from, even more surprised when I saw Sallu in it. Can anyone tell me if he does his trademark shirt rip in this movie or he didn't do it back in the 90's?
ragesh51 on Monday, January 03, 2011
I love this song! It's one of my favorite songs. I used to sing it for my wife before our marriage, but I am affraid to say that she hates this song for some reason, very unfortunate!
tommyuel on Wednesday, October 28, 2009
Thanx for uploading this song. really took me my school days when i continueosuly saw this movie 13 times in a span of time. A lots of Thanx.
View all 170 comments related to song Dekha Hai Pehalee Baar
Popular Links on HindiGeetMala