Video of this song from youtube
Average Rating : 4.53
Total Vote(s) : 17
Please rate this song between 1 star and 5 stars (5 stars being the best). Just move your mouse on the stars above and click as per your rating. Your rating will really help us to improve our website. 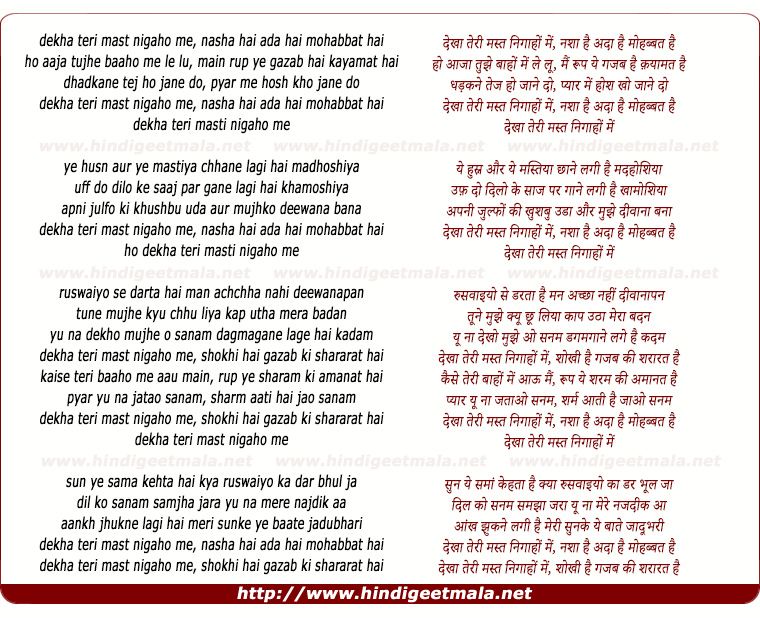 Comments on song "Dekha Teri Mast Nigaho Me"
pream5 on Saturday, June 01, 2013
The set design in this song is seriously incredible! Especially for that
time period in Bollywood when janky, kitsch design elements reigned
supreme. Hats off to the set designer! You were decades ahead of most of
Bollywood.

Missyoumybreath on Monday, April 23, 2012
Akshay Sir, really looks romantic all his films... His all songs are great to watch... This is my one of the fav song of his,,,, He is the best when it come to romance...
razor ramon on Wednesday, January 16, 2013
those days I was a great fan of Akshay , his reverse kicks and all , Man I
used to practice with my friends on the beach , he was my action hero for
sure .

Tejas - The WP Monk on Monday, June 03, 2013
Even after 20 years. magic of Akshay is still the same...!
Awesome song, composition, music, lyrics, singing... every every part of
this song!