Video of this song from youtube
Average Rating : 4.39
Total Vote(s) : 46
Please rate this song between 1 star and 5 stars (5 stars being the best). Just move your mouse on the stars above and click as per your rating. Your rating will really help us to improve our website. 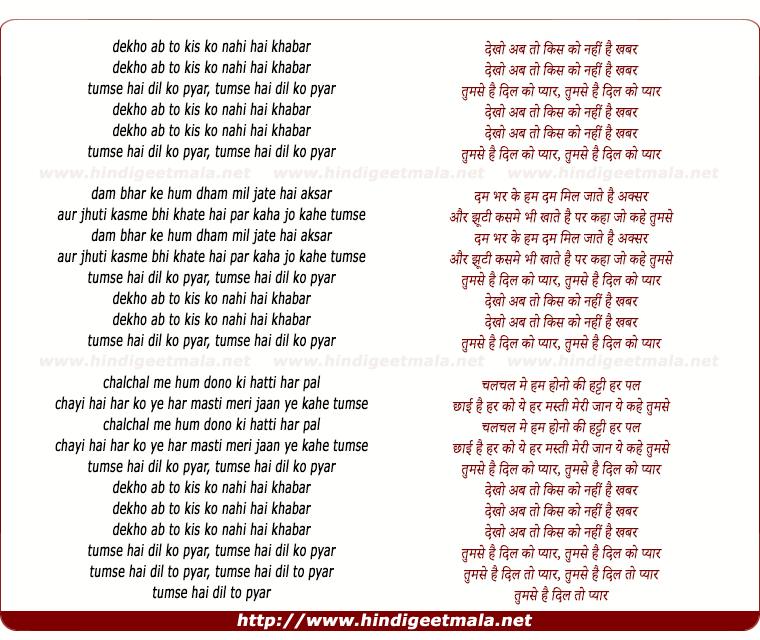 Comments on song "Dekho Ab To Kisi Ko Nahi Hai Khabar"
karthik iyer on Wednesday, November 16, 2011
Wow!, I am seeing this after 25 years, at that time I sort of felt that the
original was in English, but realised later that it was by the beatles,
needless to say the best ever copy of a western track. SJ were maestros and
even when they copied, they touched greatness, this song is even more
vibrant and peppy than the original- Sorry beatles fas, its just my opinion

June G on Tuesday, March 22, 2011
I truly believe Rafi Saab is one of the greatest singer. I think we all
miss him. More that he was a super human being. Thanks for posting this
nice song

MAC Beauty Zone on Tuesday, September 04, 2012
I heard the beatles song & I aint impressed! Prefer this song & that's my
opinion! Not asking you to agree with me or change your opinion so get over
it!

Shammi kapoor looks amazing and his dance is just awesome!! What a song and music.

MAC Beauty Zone on Tuesday, April 24, 2012
I'm well aware of that fact thanks! I was stating my opinion that I find
the indian version very catchy and the video is fab!