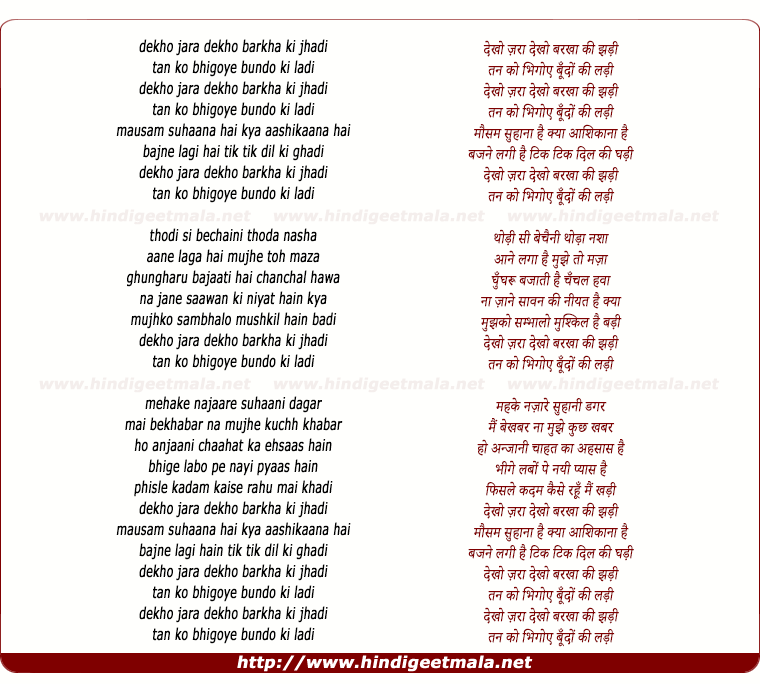 Comments on song "Dekho Jara Dekho Barkha Ki Jhadi"
Saffronwing1 on Saturday, June 26, 2010
Lataji singing at that age and sounding just like the girl kajol in the movie is awesome. Lataji was born in 1929 so we can make our her age during the singing of this song. Other artistes shud learn from this be it actors or singers else they will be all one time wonder people as we have been having all along, after the passage of the golden era of movies.
Vinay Shah on Friday, March 04, 2011
King Kumar is really awesome in this song with his brilliant performance &
wonderful expressions . I love Akshay - Kajol together . Akshay is most
versatile actor .

longoria2008 on Friday, May 06, 2011
Why do I have the feeling that on 0:33 the situation should change better,
I mean shouldnt Kajol jump between the legs of Akshay ??? was a bit gay

AlphaCentauri24 on Sunday, April 10, 2011
Great song. But the upload is a rip-off. this aint the complete song. Watch
the other video for full song.