Video of this song from youtube
Average Rating : 4.75
Total Vote(s) : 20
Please rate this song between 1 star and 5 stars (5 stars being the best). Just move your mouse on the stars above and click as per your rating. Your rating will really help us to improve our website. 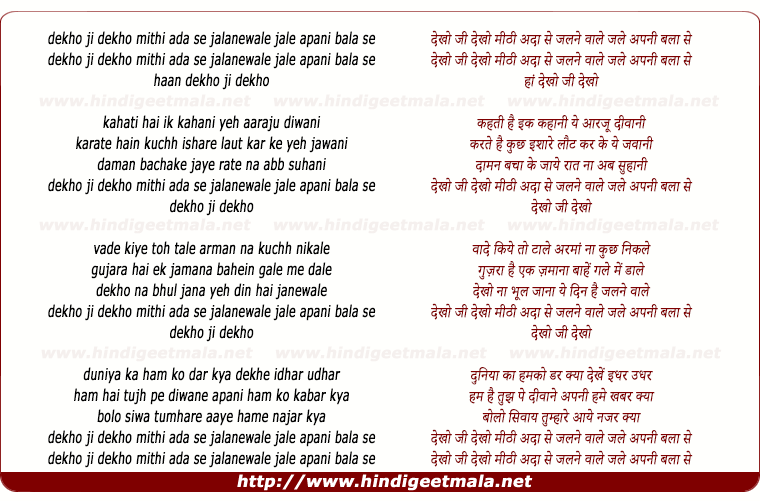 Comments on song "Dekho Jee Dekho Mithee Ada Se"
Murtuza H on Friday, March 08, 2013
Oh! it is a difficult task, and not my cup of tea; I can evaluate a translation for its correctness though. However, to honor your request, I would say the lyrics in my comments above somewhat would translate to, "a period has elapsed that arms were put around neck".
Meha Dalal on Sunday, March 08, 2009
MAI BAAP (1957) BALRAJ SAHNI, SHYAMA, NAZIR HUSAIN. JOHNY WALKER, MINOO
MUMTAZ, S.N.BANERJEE Produced By: SADIQ PROD. Directed By: M.SADIQ Music
By: O. P. NAYYAR FAMILY DRAMA **

Oldvidio on Thursday, February 26, 2009
I like songs of this film.I will be thankful to you if you can upload videos of the songs.please...Thanks...
View all 7 comments related to song Dekho Jee Dekho Mithee Ada Se
Popular Links on HindiGeetMala