Video of this song from youtube
Average Rating : 4.74
Total Vote(s) : 50
Please rate this song between 1 star and 5 stars (5 stars being the best). Just move your mouse on the stars above and click as per your rating. Your rating will really help us to improve our website. 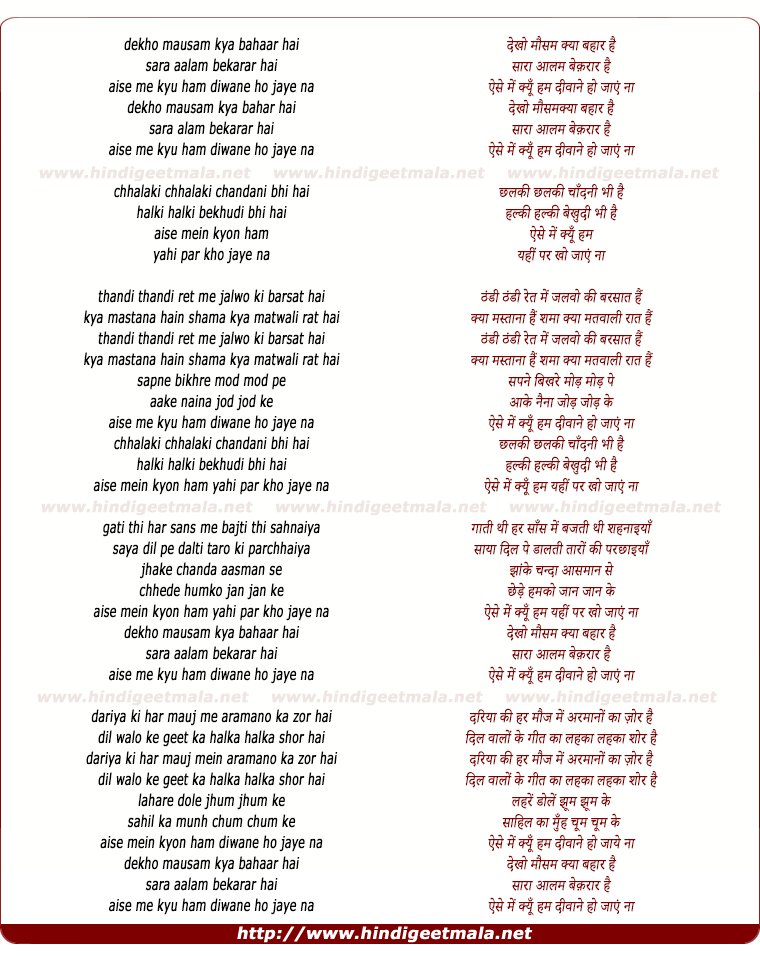 Comments on song "Dekho Mausam Kya Bahaar Hai"
tubepipevision on Wednesday, August 18, 2010
I am not very sure but I read somewhere that this song with obvious western
touch and foot tapping beats, lead to parting of ways of thinking between
Music Composer Chitragupt and his mentor S N Tripathi, who was not very
fond of western tilts in music compositions. Anyway it remains a favourite
song of all of us for ever.

vinayfound on Thursday, March 19, 2009
What sweet delight - elevates your mood and lightens your day . Technically
and aesthetically so perfect - if you miss a single note of the music, you
have really missed something. Chitragupta was indeed the king of melody.

Viswanathan Nair on Tuesday, June 14, 2011
@luvsargam . Lata and Suman ,it is very difficult to distinguish between,
but this one is sung by Lata, I checked various sites and confirmed it.

Mohan Harnur on Friday, January 24, 2014
Thanks for uploading this beatuful melody,had not seen the video. Nicely
picturised on The Great Villain Ajit, who started as
Hero.Mona Darling . Robert were his favourite words﻿