Average Rating : 3.39
Total Vote(s) : 18
Please rate this song between 1 star and 5 stars (5 stars being the best). Just move your mouse on the stars above and click as per your rating. Your rating will really help us to improve our website. 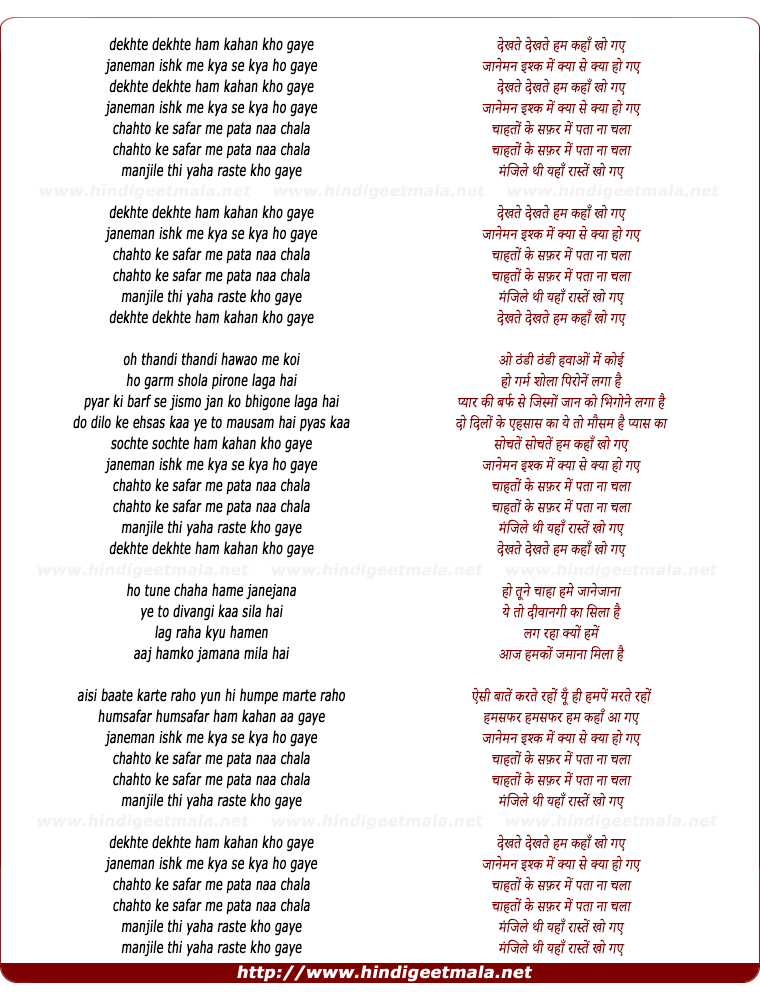 Comments on song "Dekhte Dekhte Ham Kahan Kho Gaye"
famznbd on Tuesday, April 14, 2009
this songs take me past life ... i really miss my past, when i hear the song.. i really like it
missperfect134 on Wednesday, January 16, 2008
i luv dis sng to bits.. katrina looks soo beautiful..
aggresive1queen on Thursday, December 09, 2010
@streakedsurfer The winds are cold but in my heart there is flame burning
It has washed my body and soul with the ice of love (female) Of the feeling
of two hearts, this season is the season of thirst By Thinking and
thinking.. Where are we lost In love, my sweetheart, what we were and what
we have became (male) Gradually.. where are we lost


aggresive1queen on Thursday, December 09, 2010
@aggresive1queen (part 3) You loved me, my sweetheart This is the result of
my craziness Why it feels to me like I have got the world today! (Female)
Keep saying these words.. keep on loving me like this! *kisses eyelid* My
companion.. where are we lost? (male) In love, my sweetheart, what we were
and what we have became.

EILEEN on Wednesday, April 30, 2008
The songs from this movie were incredible. I loved every single last one
and I really think that this song should have been kept in the film. It has
a very old and classic type of sound and feel to it. I really like it. I
love Akshay and Katrina as a romantic couple after this movie.