Average Rating : 3.94
Total Vote(s) : 16
Please rate this song between 1 star and 5 stars (5 stars being the best). Just move your mouse on the stars above and click as per your rating. Your rating will really help us to improve our website. 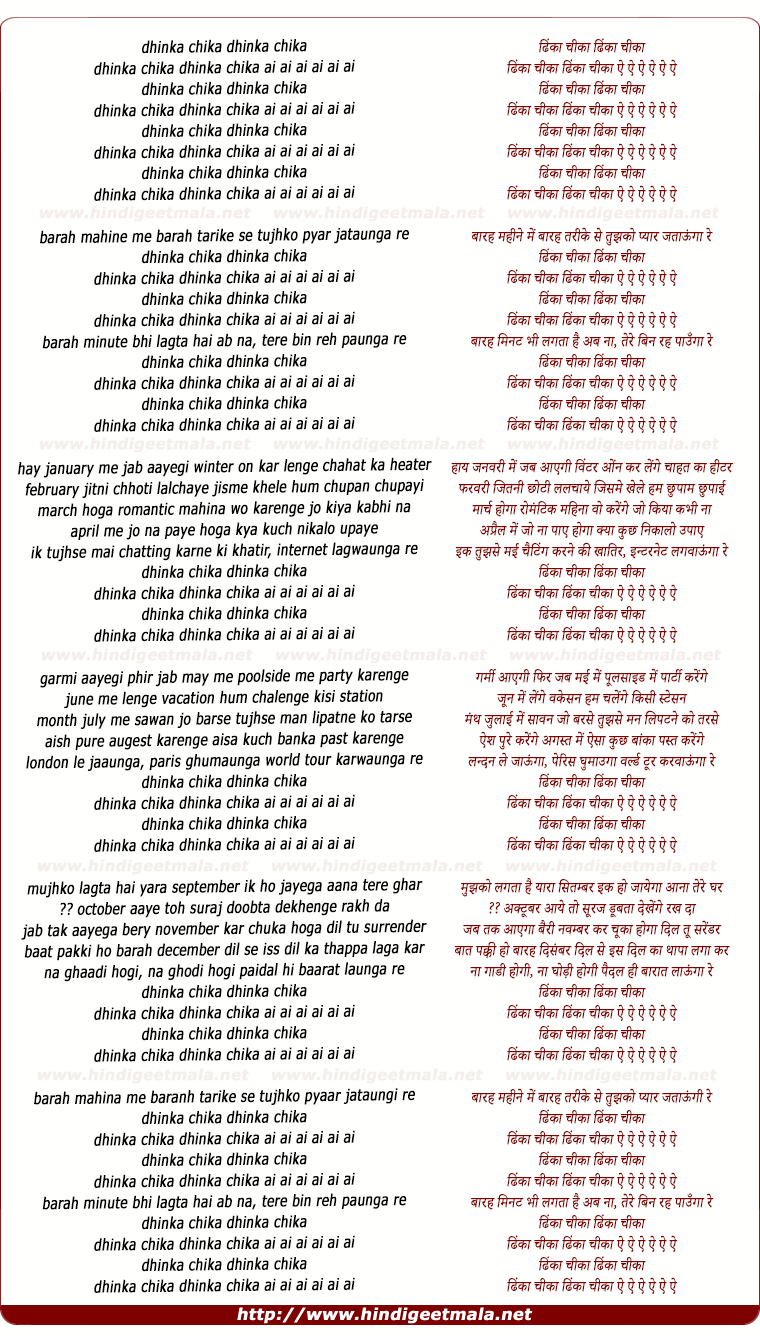 Comments on song "Dhinka Chika"
Suzie Reider on Saturday, August 18, 2012
For a killing to be considered murder, there normally needs to be an
element of intent. For this argument to be successful, the killer generally
needs to demonstrate that they took precautions not to kill and that the
death could not have been anticipated or was unavoidable, whatever action
they took. As a general rule, manslaughter constitutes reckless killing,
while criminally negligent homicide is a grossly negligent killing.

shef9000 on Saturday, November 19, 2011
all the critics at the bottom this song is awesome if only u cud understand
the real meaning behind it plus its supposed to be funny otherwise they
wudn't have gone through all this trouble. lol and u talk about music?
seriously have u ever written a song? its a funny song maybe u shud quit
being so serious and have a little fun.

deva venu on Saturday, September 03, 2011
@MiSSloveish north india primarily speak hindi and its bollywood. while
south speaks primarily tamil, telegu etc and film produced down there are
called kolywood , tolywood ect. ASIn is originally from south indian cinema
and she ventured into North. hence above video.. dancing with king of
bolywood , salman khan

Pipoz13 on Tuesday, November 22, 2011
This video (not the song) has somo things in common wiht Michael Jackson
video "They don't care about us": drumbs, kids, colorful house. For instant
I thought that it was filmed in Brasil but then researching I realized that
was in Colombo. Nice.

deva venu on Wednesday, November 23, 2011
check out the fat kid, raywilliamjohnson mentioned in his latest video ...
that kid dances outrageously lol. the video called 'fat indian kid dancing.
the new internet sensation?' LIKE THIS, so that people will check out the
kid