Average Rating : 4.40
Total Vote(s) : 948
Please rate this song between 1 star and 5 stars (5 stars being the best). Just move your mouse on the stars above and click as per your rating. Your rating will really help us to improve our website. 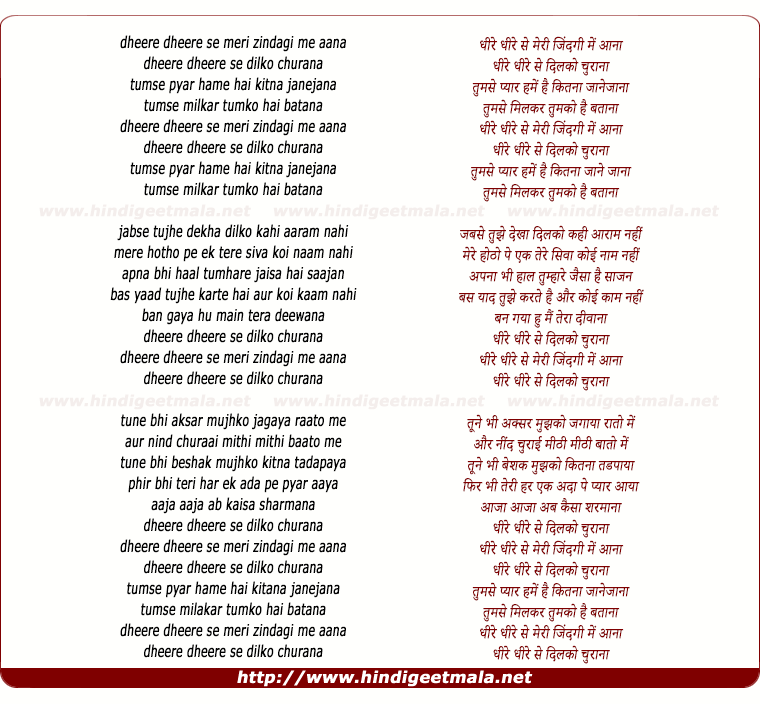 Comments on song "Dhire Dhire Se Meri Zindagi Men Aanaa"
dawood83 on Friday, April 17, 2009
chill out indians and pakis - u are both the same kind of people, brown and speaking the same language and wearing the same clothes, eating the same food and ure kids look the same - so make peace
Tejinder Teji on Saturday, October 27, 2012
Kumar Sanu is a such heavenly singer we have. Its sad that these days music
is not being composed as it was used to be in 1990s. I really miss that
era. I was so lucky during my school days I used to listen melodious songs
by Kumar Sanu. That time was awesome. There was not much technologies were
introduced. People had patience and love, but now a days more the
technologies lesser the love. I wish there would be some Time Machine like
thing so that i can go back to that era.

kekolw2 on Saturday, August 08, 2009
Awesome song. those which are truely in Love they can understand the
feeling from this song. even they will cry for this song if ur truely in
Love. just try to hear it alone u will understand the feeling if this
song

786Baloch on Wednesday, April 15, 2009
Can't stop listening to this song, one of my fav. It reminds me of my high
school, sitting all da way in da back row lookin at my first crush n singin
this song in my mind. those were the days..