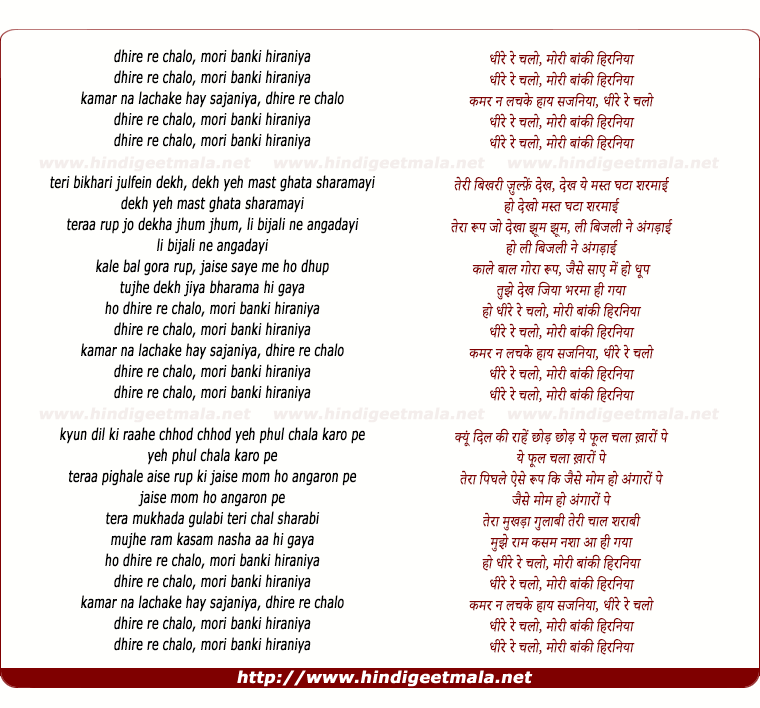 Comments on song "Dhire Re Chalo Moree Banki Hiraniya"
Weet ik niet on Wednesday, October 16, 2013
The time where woman had clothes and could still look beuatiyful. The time
where men doesnt needed to have an athletic or oversupersized muscled body
The time where woman where real, and not out of plastic. The time where
realism was seen in movies The time were music was nice and catchy and
could be felt with the heart The time...is gone and made place for filthy
movies. with half fake people made out of plastic.

nshrirang1 on Wednesday, March 14, 2012
Such a meloious song by classic MUKESH...it took me to memories when we used to listen RADIO CEYLONE...and these songs were played regularly during AAP HI KE GEET,,,or JAANE PEHCHAANE GEET programs...THANX FOR UPLOAD,,,,
Ajay Bhuta on Thursday, June 05, 2014
Class song Of Mukesh & I like this song as its Lyric ,Voice n music is
superb N same is life living song N if possible provide Original video of
song thanks Ajay Yuvraj ﻿

zamanzy on Monday, April 11, 2011
Good old Mukesh, pure sweet gem of a song, highly motivational. Growing up in Guyana, this song would bring a lovely atmosphere in the farming community which I grew up in, sunny days, children playing, laughter, families thriving, happiness and prosperity all around.
Harry S. Anchan on Saturday, December 05, 2015
A true masterpiece! Mukesh at his best! They sure don't make music like
that anymore, sadly. Today, all you see are the same old Michael Jackson
"Thriller" 1983 choreography rip-offs and associated substandard
tunes...yecch!﻿