Video of this song from youtube
Average Rating : 4.13
Total Vote(s) : 136
Please rate this song between 1 star and 5 stars (5 stars being the best). Just move your mouse on the stars above and click as per your rating. Your rating will really help us to improve our website. 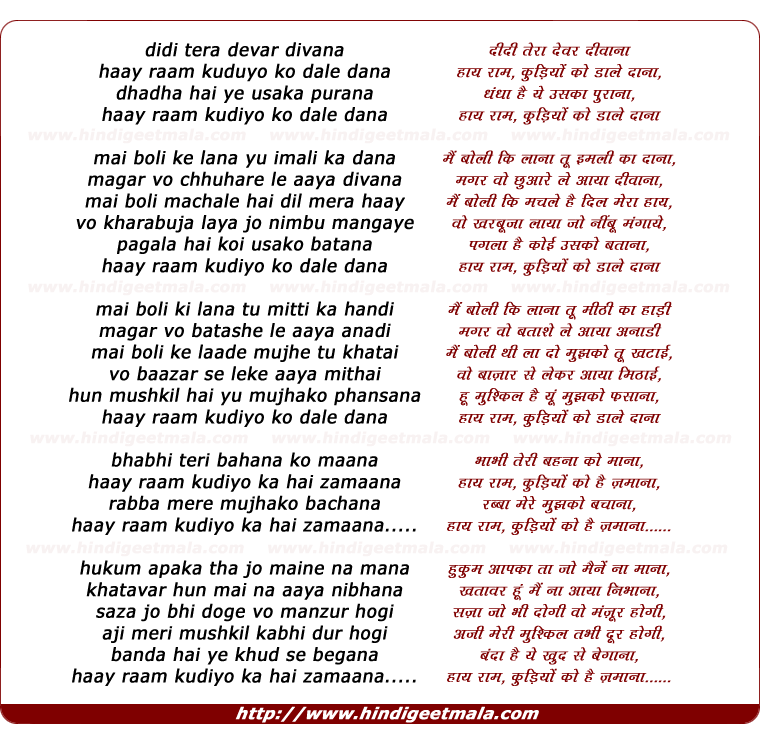 Comments on song "Didi Tera Devar Divaanaa Haye Ram Kuduyon Ko Dale Dana"
dragon on Sunday, April 12, 2009
This movie sure have some very sweet memories. Me and my friend lied to our
parents...we said that we had a field trip to attend and we ditched school
that day to watch this movie. hehehe. When Salman and Madhuri were shown at
the beginning of the movie, my friend n I were screaming like nut case. lol

shilpa88888 on Thursday, August 26, 2010
Maduri is absolutely gorgeous. She is a complete package. She can dance,
act and one of the most beautiful actress in Bollywood. Her look is really
Indian. She is an Indian beauty! I love Salman Khan's acting in this movie.
Oh Salman Khan looked so, handsome in the 90's and he still is handsome.

mr7maxx007 on Wednesday, August 04, 2010
this was the movie that inspired the likes of dilwale dulhania le jayenge and kuch kuch hota hai...though it has a very simple storyline, it's still a very fun movie to watch and madhuri was amazing in it...those who say that salman khan overshadowed madhuri should think again. lol
kote2005 on Monday, August 31, 2009
Madhuri was the hero of the film in the way that she was the sole reaosn
for becoming it so huge it. She was the biggest star of bollywood at that
time, bigger than any male star. Salman looks cute and now it is nice to
rediscover him in the film. Salma is a class of his own.

prima1207 on Friday, December 17, 2010
@wilfred316 you are absolutely right. today all the actresses look the same
to me with their daisy duke shorts, bikini sequels and failed attempt in
acting. nothing special about them that puts apart from one another.