Average Rating : 3.98
Total Vote(s) : 86
Please rate this song between 1 star and 5 stars (5 stars being the best). Just move your mouse on the stars above and click as per your rating. Your rating will really help us to improve our website. 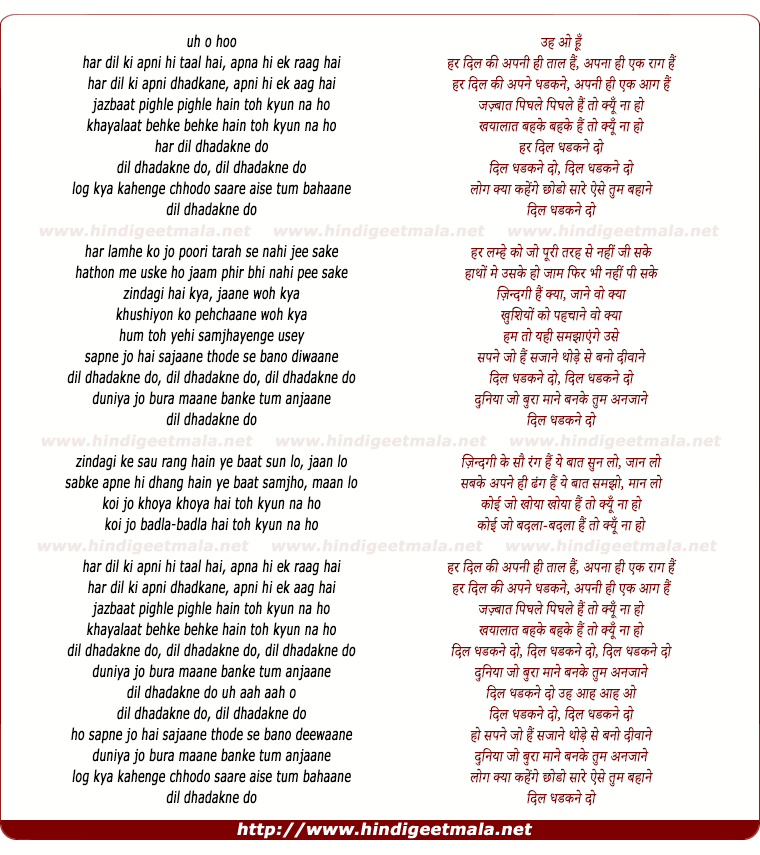 Comments on song "Dil Dhadakne Do"
Tanjil Kamal on Monday, May 04, 2015
By looking at the Mr Bull Ranveer rest sure all public heart become failure
forget about Dil Dhadakne Do. Mr Bull Ranveer is odd looking cheap smell
talented guy from Bollywood industry compare to rest new comers like Varun
and Ranbir Kapoor. Prinyka become too old and looks ugly plus her body &
dance movement become odd for her old age problem. Miss Bee Anushka looks
ugly too compare to Bombay Velvet. Except Anil's acting it looks rest all
have zero ingredients for Dil Dhadakne Do, Becuause all public Dil Margaya
only pay 10 Rupees per ticket, so the producer Ka Dil Dhadakne Do and
Samajne Do how to make a good movie next time than casting that Mr Bull
Laura Biscuit Ranveer..!!!﻿

Ranman on Wednesday, May 20, 2015
Farhan,are your dil chahta days ever going to be over?Is there another
BMB..i thought you were different and taking bollywood into different
arenas..disappointing!Imitiaz grew and made highway and you still are doing
the same again and again..keep cashing feelings..form,emotions which are
not real.Money is way powerful than moral these days and you are no
different than Sunny Leone at least she is honest.﻿

Hunyah Irfan on Thursday, May 14, 2015
great track
priyanka chopra and farhan akhtar singing this now ,this seems different
not too many bollywood actors and actresses sing themselves ,
but they r amazing
priyanka act is amazing , i dont think her singing is , but in this song
,she sings wells
and farhan aktar is always amazing
great track
n nice wrk
can't wait to see the film﻿

Diya Suri on Friday, April 24, 2015
Disappointed i had high hopes simply disappointed that they didnt get more
background singers,if your going to have pc and farhan sing there voices
should only be used for there scenes in the song! It looks too false as the
voices are used for other characters. Still going to watch the movie though
still high hopes for the movie overall!! ﻿

priyanka malhotra on Friday, April 24, 2015
Marketers of the movie.. If u are reading it.. Do not promote this song on
tv at all..
The people who are planning to watch the movie would change their mind...
And u will loose ur remaining potential audience..
Dont know how priyanka chopra and ranveer singh even agreed to do this..﻿