Video of this song from youtube
Average Rating : 3.73
Total Vote(s) : 15
Please rate this song between 1 star and 5 stars (5 stars being the best). Just move your mouse on the stars above and click as per your rating. Your rating will really help us to improve our website. 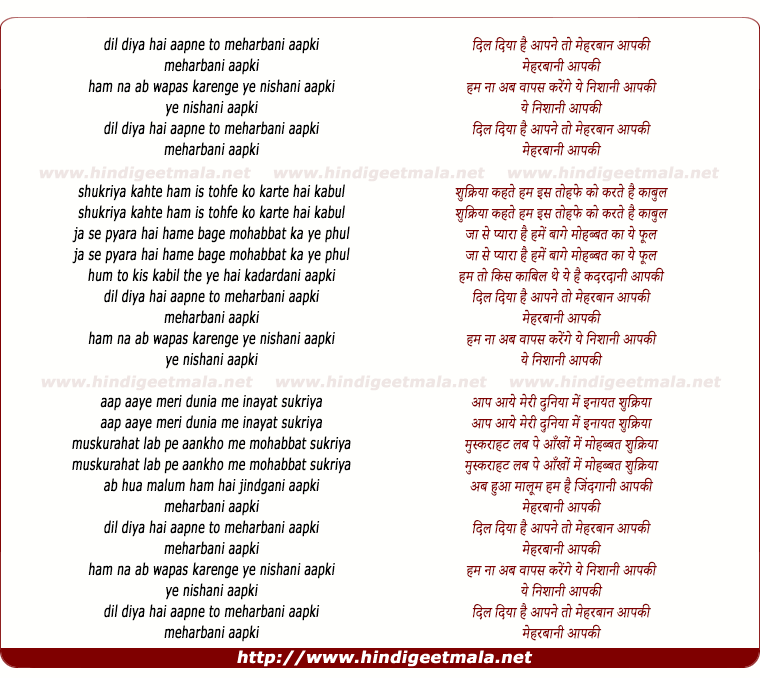 Comments on song "Dil Diya Hai Aapne To Mehrbani Aapki"
Dee Thakore on Saturday, September 18, 2010
@jasbongy she is not Bina or Rehana...none of them worked in this film.
It's a dance troupe hire by assistant/ choreographer director Guru Dutt.
Most likely from Uday Shankar's school (bro. of Ravi Shankar). once he was
student. Please note: This movie was ban by Morarji Desai after 14 weeks+
Brodcaste minister B. K. Keskar (1951) asked air India radio to stop
playing hindi movie songs. so we listen radio ceylon :) But this movie and
it's songs suffer lot. Cheers!

bambaikababu2 on Tuesday, August 30, 2011
Dharmesh ji, This is a wonderful song by lyricist Vrajendra Gaur who surprisingly turned to script writing after this and wrote films like Kati Patang, Sharmeelee, China Town, Saraswatichandra, Anuraag, The Great Gambler, etc.etc,
jasbongy on Saturday, September 18, 2010
Beautiful,touching song,sung so sweetly by one and only our dear Lata ji.
Thanks Dharmesh ji for sharing.Thumbs Up. Thanks Sharma ji ''kuckudk'' for
sharing. With respect. Sarla.

saz9297 on Saturday, September 18, 2010
julibaba - you are here after a very long time with excellent song.
dialogue in the last ' saheb' (not clear) should be removed as this defeats
charm of song. thank you