Video of this song from youtube
Average Rating : 2.00
Total Vote(s) : 4
Please rate this song between 1 star and 5 stars (5 stars being the best). Just move your mouse on the stars above and click as per your rating. Your rating will really help us to improve our website. 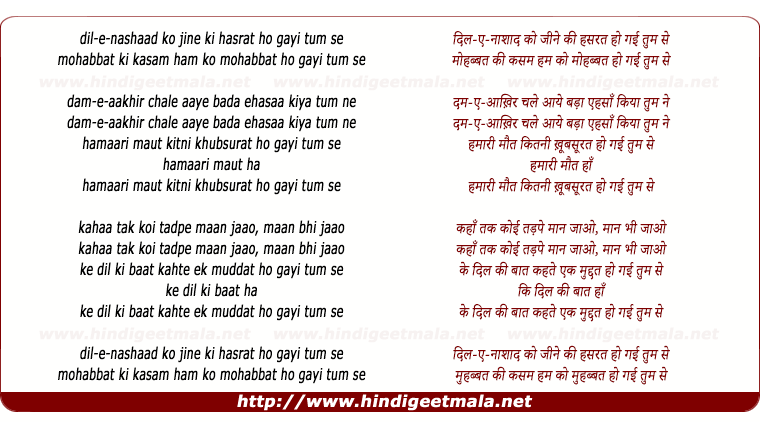 Comments on song "Dil-E-Naashaad Ko Jine Ki Hasarat Ho Gayi Tum Se"
Pashambay Baloch on Saturday, April 02, 2011
So this thin voice was rejected by S. Mukerji, the owner of Filmistan. But
this voice has sealed the fate of heavy voices. She is the fittest in every
genre of singing, whether bhajan, naat, qawali, folk, classical, mujra etc.
In early era of her career, observe the fresheness and innocense in her
voice. Thanx Rehmaather for digging and presenting rare gems on our behalf.

Moid Hasan on Saturday, April 02, 2011
This is once again not only rarest but also lata's song of early era .one
can see the sweetens in her voice and so much perfection in rendition in
beginning stage of of her singing .Hans Raj Behl proved his worth. Thanks
rehma for this upload

saz9297 on Monday, June 13, 2011
i wonder where from you got these beautiful rare collection of songs. i've
been to your channel, you are young but taste of very old songs is indeed
very surprising. highly appreciable. many thanks and regards