Video of this song from youtube
Average Rating : 4.35
Total Vote(s) : 51
Please rate this song between 1 star and 5 stars (5 stars being the best). Just move your mouse on the stars above and click as per your rating. Your rating will really help us to improve our website. 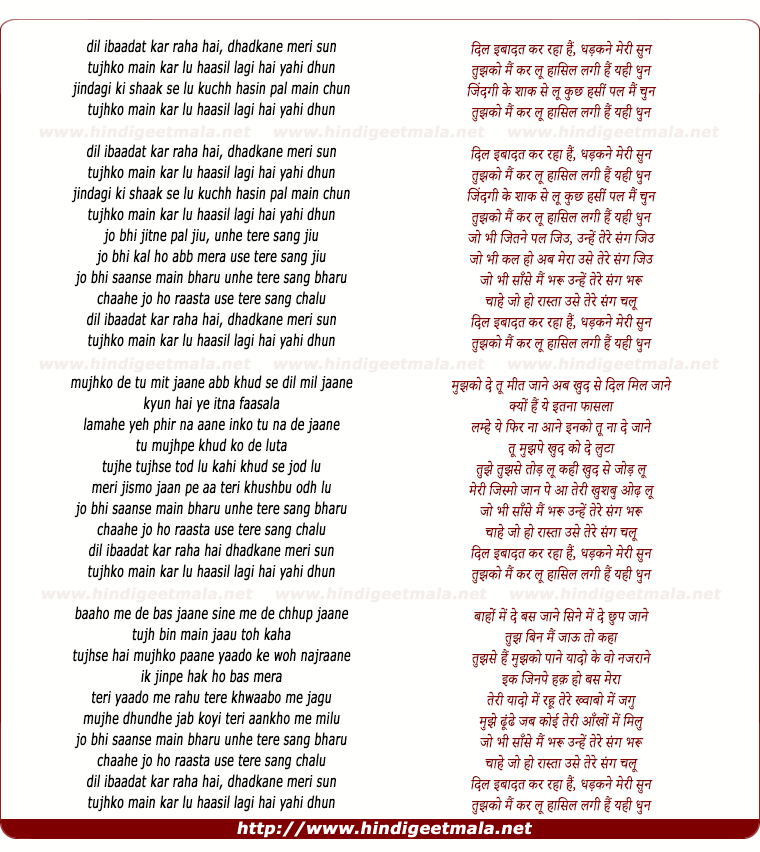 Comments on song "Dil Ibaadat Kar Raha Hai"
TheRahi00 on Thursday, January 27, 2011
@shuterbug69 he have ever good movies in all hismovies he is not lucky he
is the most lucky guy.And he is my fav actor.The most hate him becausse his
kissing but he is a good actor.I think he is good acting in
Gangster,Jannat,Awarapan,Tum Mile,Once upon a time in mumbai,Crook

Seraj Omer on Saturday, May 18, 2013
because of what she's seeing when she look at him, he's trying to do his best to be something, but in the movie they didn't believe in him, she felt so sorry about him, and i did the same Y_Y
ashrafmmasood on Friday, April 22, 2011
love the momentum for

Karandeep Pandher on Saturday, December 08, 2012
@saimaforever its been a while since i watched the movie, but as far as i can remember, shes crying because they have financial and relationship problems...
View all 145 comments related to song Dil Ibaadat Kar Raha Hai
Popular Links on HindiGeetMala