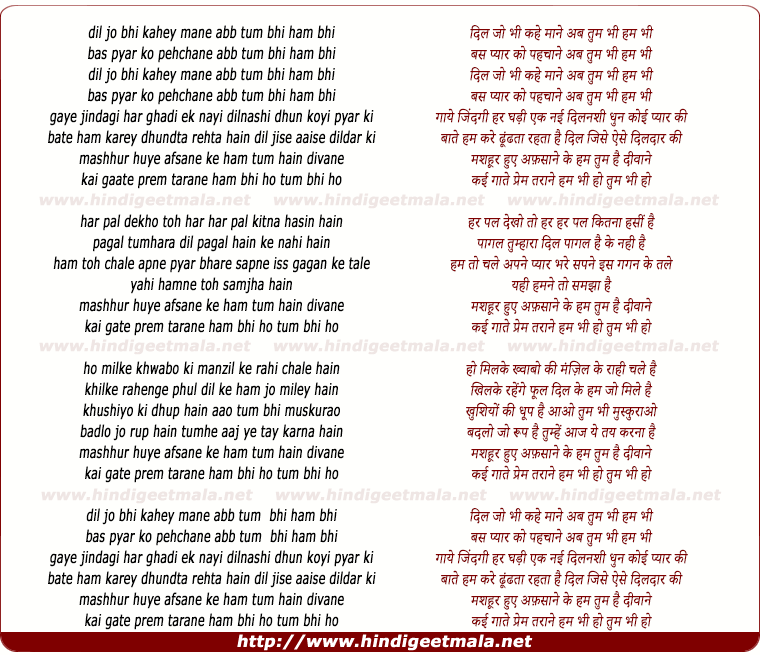 Comments on song "Dil Jo Bhee Kahey Mane Abb Tum"
xt230 on Tuesday, June 16, 2015
This is my homie jam. Best song ever made. I will love it till death. No
turning back. It's all Karan Sharma and this movie's magic. I can never
forget the chorus, the background, the car, the styling and Karan's awesome
move from 2:00 to 2:01; perfect timing.﻿

harsh240690 on Thursday, September 01, 2011
@kabir46 dude install the real player.. after that wenever u'll watch any
you tube video u'll see a button saying "download this video" on d top of
the playing video in your browser.. njoy...

Mariam Karim on Thursday, December 10, 2009
i luv this song karan sharma is soo hot in this film and he looks abit like shahid kapoor to.
Vic Varma on Tuesday, August 18, 2015
This guy had the confidence and talent, too bad he didn't make it big.﻿
View all 15 comments related to song Dil Jo Bhee Kahey Mane Abb Tum
Popular Links on HindiGeetMala