Average Rating : 4.18
Total Vote(s) : 160
Please rate this song between 1 star and 5 stars (5 stars being the best). Just move your mouse on the stars above and click as per your rating. Your rating will really help us to improve our website. 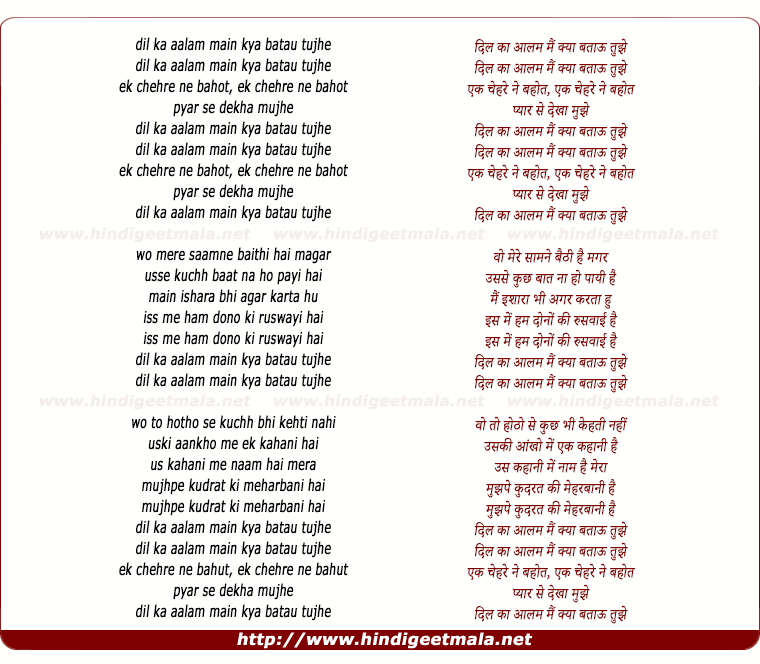 Comments on song "Dil Ka Aalam Main Kya Batau Tujhe"
liverpoolisbest1001 on Saturday, March 16, 2013
Don't think that the girl is Anu Agarwal since this song was never in the
movie, only on music album (soundtrack).

Vally Vinay on Wednesday, June 06, 2012
Though i like all Songs in Aashiqui,Though i like all Songs in Aashiqui,
This is most favorate song. There was a story in those days about thi song.
As per my knowledge this song is not in Aashiqui film. But added in in
Audio Cassette(No CDs at that time). After looking inot that movies
audience surpsrised where is that song. Later after some time my friends
were told this song was added. I dint saw this movie later in theatres, but
even purchased DVD of this movie. This song was not there.

Vally Vinay on Wednesday, June 06, 2012
This is FIRST TIME IN LIFE, watching this song in video. As one of said in
this comments, may be this song is Private Album. But basically song is
recorded for Aashiqui only. There are many things are there like in this
films. Enjoy the Song...

Mohamad Arshi on Wednesday, June 26, 2013
no. jthjisboring the new aashiqui is better than this one just listen to a
song of aashiqui 2 and u will forget this 1 bet 2000