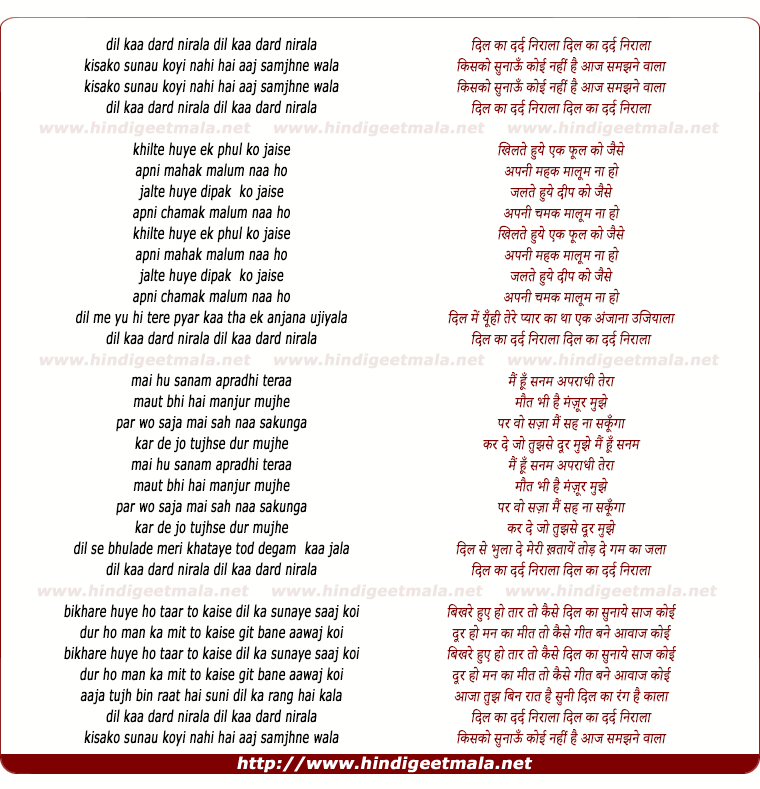 Comments on song "Dil Ka Dard Nirala"
rumahale on Thursday, January 15, 2015
I have read with equal great interest the comments by Anindya Roychowdhury
and Anirudha Bhattacharjee in response to the comments by Rajiv Vijayakar
on one side, and, comments by suresh verma on the other side. There is no
need to quantify and assign ranking to these geniuses and legends of golden
era. It is sufficient if one listens the magical and wonderful melody
created by the geniuses and appreciate the combined creativity (of
lyricist, music director, and, singer). For me, this song is unique,
different, and, outstanding, besides being beautiful. I appreciate your
best endeavours and initiatives in sharing rare gems. Video presentation is
added attraction. Thank you.﻿

suresh verma on Sunday, August 29, 2010
It was indeed astonishing how Maestro S D Burman could create such
melodious sad songs for Mohd. Rafi, rarely needing to take him to higher
notes. Thus it was no surprise to listen to Anandji Bhai conceding that it
was only Dada Burman who made the best use of Rafi Saheb, which may come as
a shock for many Naushad, Madan Mohan, Roshan, Shankar Jaikishan, Laxmikant
Pyarelal or even Kalyanji Anandji fans. But Dada's use of Rafi Saheb's
voice was completely different compared to other composers.

Rajiv Vijayakar on Monday, June 25, 2012
You have not even mentioned OP and Ravi. SD brought Rafi out of the Punjabi
and high-pitched songs of the '50s and the litanies of Naushad. This song
is similar to many of Chitragupta and the softer songs of OP. Rafi's most
versatile range was explored best by LP, followed by OP and SJ. SD and
Naushad ranked fourth and Madan Mohan ranked nowhere.

Anindya Roychowdhury on Monday, October 29, 2012
yawn...here we go..the incorrigible quack journalist shoving his oar in,
everywhere...LP *has* to be the best in *every* conceivable category of
music. If "LP used Rafi the best" is, at best, a highly subjective and
debatable statement, "Madan Mohan is nowhere" is a laughable assertion. Who
says/decides on this ridiculous ranking? Is there some quantifiable,
mathematical formula?

joshuadiesel on Sunday, May 08, 2011
@vermasureshc
well that is true but dada burman and everybody else were blessed to have a rafi with his god like voice and his classical background mohd rafi was the best will be the best forever and ever