Video of this song from youtube
Average Rating : 4.00
Total Vote(s) : 619
Please rate this song between 1 star and 5 stars (5 stars being the best). Just move your mouse on the stars above and click as per your rating. Your rating will really help us to improve our website. 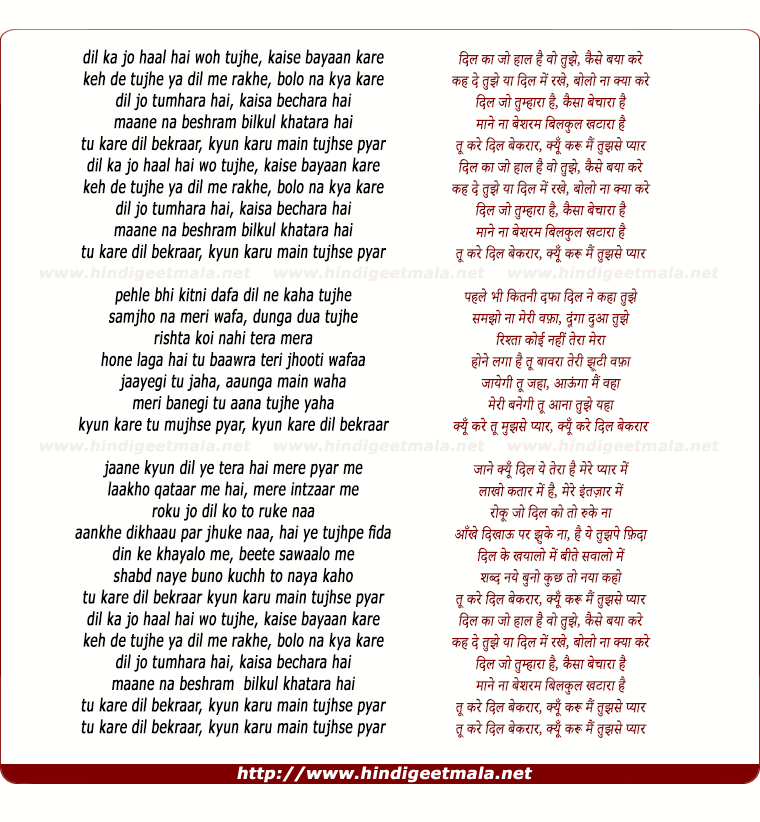 Comments on song "Dil Kaa Jo Haal Hai, Woh Tujhe Kaise Bayaan Kare"
dolusboy on Monday, September 16, 2013
Hear this song in isolation, it is a beautiful song - will grow on you -
Sarfarosh's Jo Haal Dilka in spirit is evident with a new genre/today's
arrangement. I felt this was the best of the pack. I was expecting a
different picturization of this (practical but surreal cinematography) - is
deewane ladke ko but one notch up - type. Ranbir undoubtedly shows his
acting genes with admirable screen presence. Good to enjoy talent in
perspective than comparisons? Everybody brings there own genius.

nitish k on Friday, September 27, 2013
On side note,dont even think to compare legend of older age with present
generation.Today singers donot record entire song in one go.They r supposed
to sing in part by part as per convenience .Latter parts and sub parts r
composed into complete song.Every thing is computerised from voice to
music.In older age there was no facility as such.Singers supposed to record
the song in one go with entire band.Kishore was a true legend having
enormous versatility.Rahet is good kawali singer.

Sourav Ganguly on Wednesday, September 18, 2013
Yeah agreed that he came into the industry bcz of his father but his films
are becoming hit and people are loving his work and he himself his
performing very well that toh i don't think is bcz of his father's name.
Ranbir in his own space is a superstar and a great actor and in the coming
years he is gonna be a much bigger star there's no doubt about it and SRK
on the other hand is a king and he has been in the industry 4 now lyk 20
years so comparing him with SRK is not right..

Pratyush P on Thursday, September 26, 2013
This song is composed by Lalit Pandit of the Jatin Lalit Duo Fame, who
ruled the 90s & so on till they split up in 2006. They had a typical
flavour in their compositions which is very evident here in the song.
Abijeet Da is here after a long time, who again have sung so many hits for
the J-L Duo, especially for SRK. Very soothing tune n J-L style of
music.Gud Job Lalit. Wish you pair up again with ur Bro Jatin n bring back
that J-L melody era again. Need more songs lyk this.