Video of this song from youtube
Average Rating : 4.11
Total Vote(s) : 315
Please rate this song between 1 star and 5 stars (5 stars being the best). Just move your mouse on the stars above and click as per your rating. Your rating will really help us to improve our website. 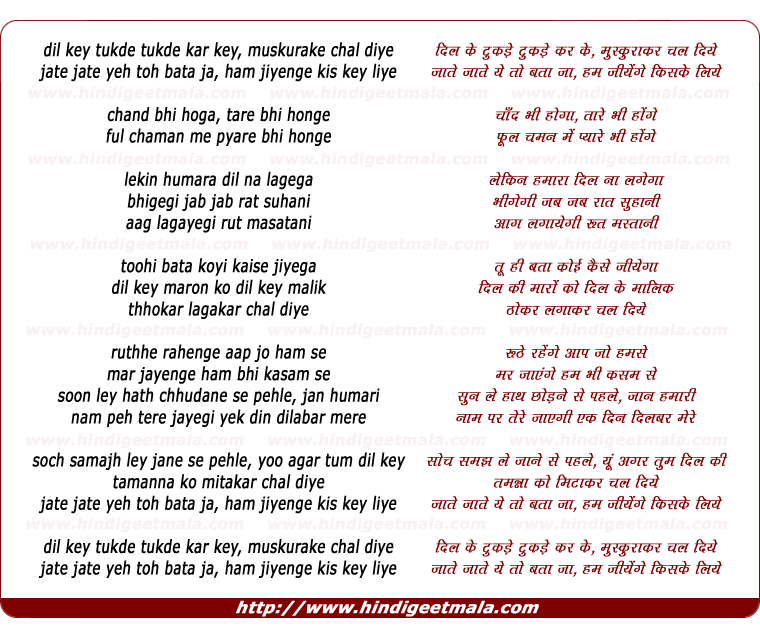 Comments on song "Dil Ke Tukde Tukde Kar Ke, Muskura Ke Chal Diye"
virtueous1 on Tuesday, June 01, 2010
there are many legends in music.But,Dr K.J Yesudas is the legend of the legends due to his voice quality,pronounciation,immense knowledge of classical music,versalatily etc.He can sing any song in any language of any country whether it be hindi,bengali,oriya,tamil,kannada,telugu,sanskrit,marathi,english etc..HE IS NOT THE SINGER OF MILLENIUM,HE IS THE SINGER OF THE WHOLE MANKIND !!
gretgy on Friday, September 21, 2012
God created Yesudas to listen to music in all forms..carnatic..film..folk..devotional..light music.. and in all languages.. No wonder he is named Celestial Singer..!! without doubt most perfect singer and a manly voice.. !!
biplabjha on Saturday, September 24, 2011
yashu jeee is really great with melodious voice ,oh my god what happened today
such a nice song ,best voice what else u want

murlidharancn on Tuesday, June 28, 2011
he got the best national singer award for this and deserve it
Mudassar Majeed on Thursday, December 15, 2011
Rafi has sung songs in many languages .. tastes of people also
matter. Yasudas is a great singer .. but for me Rafi is the best
singer ever born ... he has the versatility and strong control over the
feelings and full rights of the song ... he had a supreme quality of
matching any actor .. he could sing song of any mood .. his voice was
awesome .. style was bravo! ... He is much more popular than
Yasudas.