Video of this song from youtube
Average Rating : 4.56
Total Vote(s) : 141
Please rate this song between 1 star and 5 stars (5 stars being the best). Just move your mouse on the stars above and click as per your rating. Your rating will really help us to improve our website. 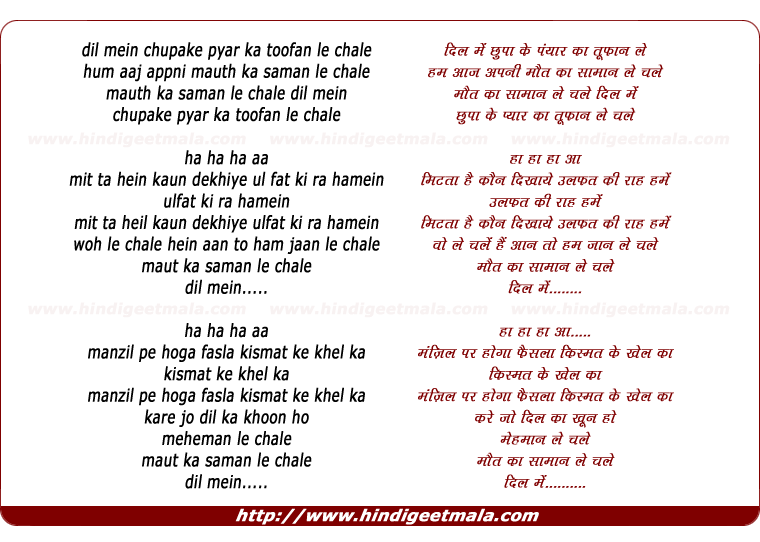 Comments on song "Dil Mein Chupake Pyar Ka Toofan Le Chale"
amashaize amavasya on Friday, June 01, 2012
Happy to find that young people like you admire and like these songs of
yore.I who is 20 from Sri Lanka is also a great devotee of old hindi movie
songs.Actually these hindi songs have some uncomprehensilble thing which
make so many generations attract towards them. Thank you for uploading this
everlasting song.

Suhail Ahmed on Sunday, October 30, 2011
" Aan" was India's first color movie produced and directed by the greatest
pioneer and showman of Indian Cinema, Mehboob Khan,starring the evergreen
the greatest star and actor of Hindi movies, the living legend Dilip Kumar
and the newcomer Nadira and Nimmi. "Aan" was a golden Jubilee super
boxoffice bonanza and remember itis India's first color movie. This movie
ran in City of London for 25 weeks and the first Indian hindi movie to make
aSilVER JUBILEE outside India,

Vinod Bhatia on Thursday, December 29, 2011
Picturization of this song is excellent. The music of the song is excellent
too with wonderful acting by Dilip Kumar.It is believed that Nargis was to
be in place of Nadira, who was a last minute selection as it is a hearsay
that Raj Kapoor did not let Nargis act in this movie. Is Nargis had been
there in the movie, the movie even though excellent would have been par
excellence. Nadira did a good job.