Video of this song from youtube
Average Rating : 3.75
Total Vote(s) : 8
Please rate this song between 1 star and 5 stars (5 stars being the best). Just move your mouse on the stars above and click as per your rating. Your rating will really help us to improve our website. 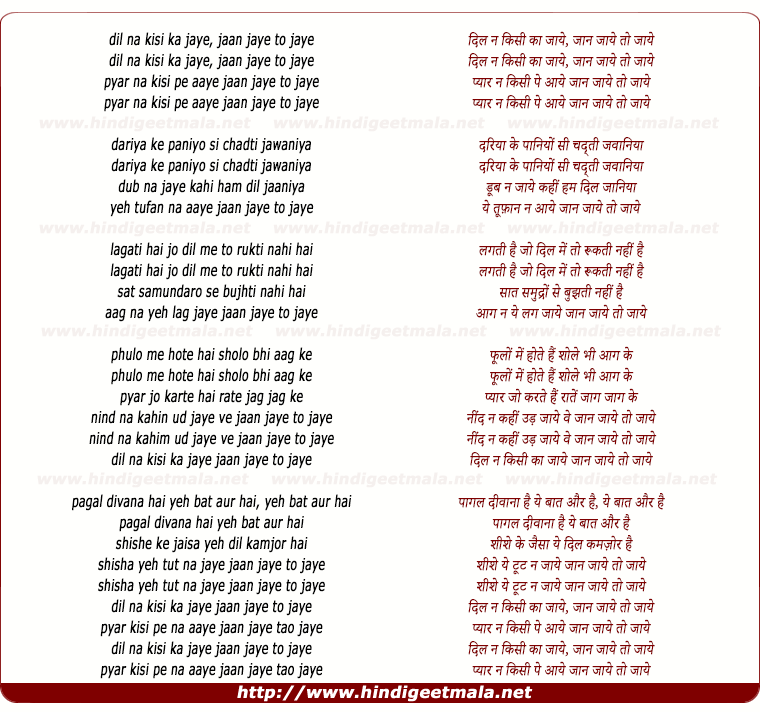 Comments on song "Dil Na Kisi Ka Jaye"
Unknown090981999 on Sunday, May 03, 2009
THANK YOU SO MUCH for uploading this!!!! I love Divya so much. I have read
an interview of her, in which was mentioned Raveena was jealous of this
red/brown outfit Divya wears. Even though Divya said she didn't understand
why, she found Raveena's outfit, the black one, appearing better in the
dark. I have been looking for the part of the movie where they ( Divya and
Raveena ) would were these outfits. Btw no wonder, one gets jealous, Divya
looks absolutely gorgeous. I love you Divya, RIP angel.

rajiv0082 on Sunday, June 07, 2009
nice song..and sum awesome dancing. Divya looked more beautiful than raveena and had a better figure for sure. Raveena looked a bit chubby in this song.

can anyone tell me if this film was a hit or a flop?...such a multistarer has to be a hit

KhoodHafiz on Sunday, December 26, 2010
Aww .. The highlight of this video is certainly Divya but Raveena is very pretty, too :) Although I've never liked her much. Wish I had seen more movies of Divya and Raveena :) They were so cute together.
princessgirly girl on Thursday, July 18, 2013
horrible. cant stop laughin at it. kareena slapped a senior news reporter
in a meeting. she doesnt have any voice over it. i could find the clip here
>>> bit.ly/15GCw43?=zhqii

Nida Nizami on Thursday, June 11, 2009
Randomly caught this movie on t.v. a few months ago and I seriously didn't
think I would ever hear much less see this song again. Thanks mucho!