Video of this song from youtube
Average Rating : 4.13
Total Vote(s) : 864
Please rate this song between 1 star and 5 stars (5 stars being the best). Just move your mouse on the stars above and click as per your rating. Your rating will really help us to improve our website. 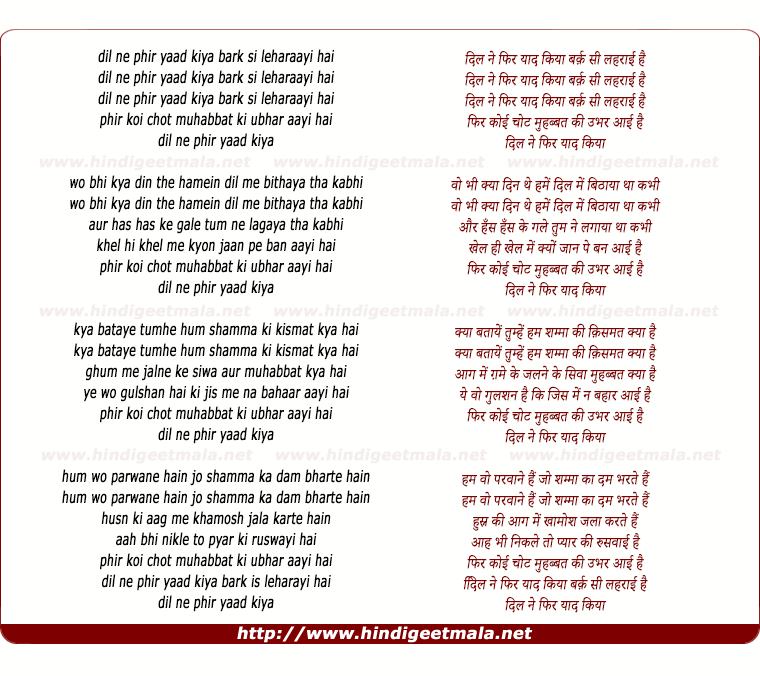 namitamathur61 on Saturday, May 16, 2009
You are welcome! Wonder if you have noticed most great singers go off note in live performances-have seen Alka Yagnik,Kavita Krishnamurthy,Shankar Mahadevan, Rehman,Kumar Sanu and Sunidhi Chauhan go off...but I really admire Lata ji and Jagjit Singh ji acknowledge publicly.Rehman I think could not hear his track. Lata ji had high fever -was Bal Thackeray's show.Mukesh da sang very well in a particular scale-had never learnt music! Later communal politics forced him to do songs beyond his reach.
namitamathur61 on Tuesday, July 27, 2010
@studer3500 I did meet him..my family esp my father had many opportunities to hear him live &stay with him.In fact my father also sang his songs in front of him while Mukesh da played the harmonium and offered a lot of praise to him.Yes records are 'limiting'...another thing singers tend to forget the original(unless they rehearse for a show) when asked to sing suddenly esp at family meets...a lot of 'variations' creep in! He was a truly great and noble soul...God Bless him wherever he is..
namitamathur61 on Tuesday, June 30, 2009
Got to read comments by all here.Rafi,Kishore Kumar,Mukesh da were all
great singers and one thing I can say they respected each other a lot...we
are belittling their mutual respect and admiration for each other by
comparing them and saying one was better than the other.. bet their souls
are hurt...may they rest in peace wherever they are...they all have left us
a great legacy to enjoy and cherish.Voting is no yardstick as we all know
how 'loaded'/unbalanced it is.


PONNADA SRINIVASPRASAD on Saturday, October 19, 2013
RAFI, POPULAR NAME OF MOHAMMED RAFI, was an encyclopaedia of Hindi film
music, his vocal adroitness, captivity, heart-rending delivery are USP and
other singers simply are little match and no exception, The variety of
songs, ghazals, patriotic songs, mad songs, fast songs, classic/raga based
songs, sharaabi songs, sad songs and what else, Mukesh Kishore are pygmies,
dwarfs, Rafi ruled for over 4 decades and still adored