Video of this song from youtube
Average Rating : 4.43
Total Vote(s) : 1246
Please rate this song between 1 star and 5 stars (5 stars being the best). Just move your mouse on the stars above and click as per your rating. Your rating will really help us to improve our website. 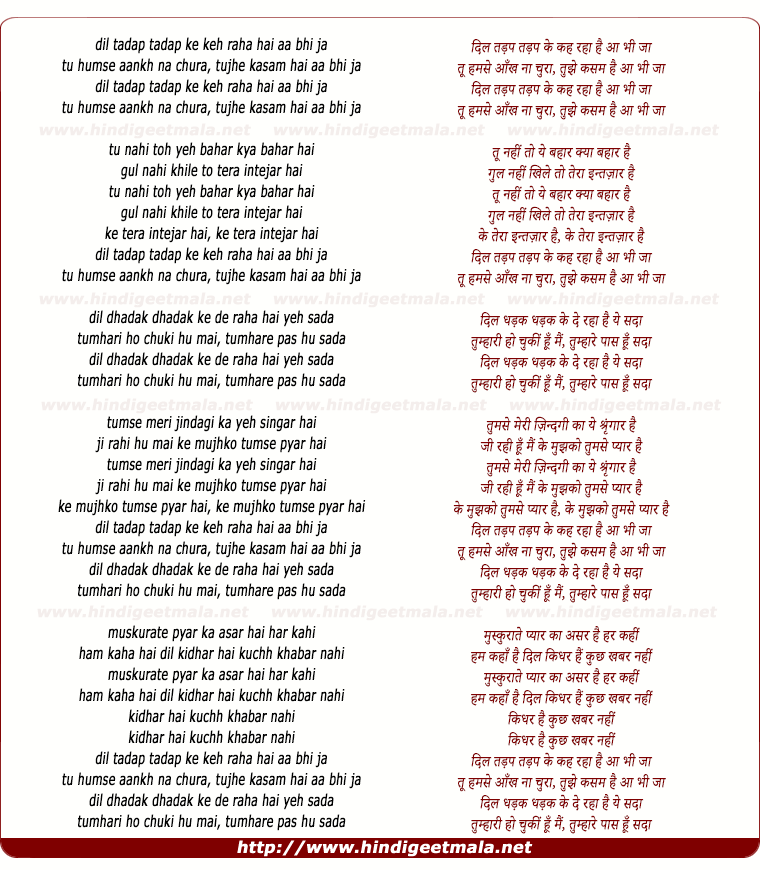 Vasant Pusalkar on Thursday, June 25, 2009
It is not easy to Indianize a foreign tune and to make it popular for next
50 years. He was a creative genius. Nobody used Mandolin and Obo
combination like Salilda. His no tune is similar to other Hindi songs.
Salilda is great beyond doubt. He was guru of Pt. Hridaynath Mangeshkar
too. Tamil film music king Illayaraja was also his assistant for this film
and the guitar in the starting was played by him. Music director Dattaram
given the Thheka i.e Rhythm of Dholak for this film.

Viswanathan Nair on Tuesday, June 22, 2010
@SuperVasant . I am intreagued by the information that Ilayaraja played the
guitar bit in the biginning. Are you sure,if it is,it is a wonderful
combination. Dattarm did the dholak is also very unique. I will try to find
out the Ilayaraja connection because he is alive and still going strong. At
the recording studio Lata used to tell Salil, before she was to reherse a
song for him "today I am going to sing a totally different song, different
from other composer's tunes"

TheHitDetector on Tuesday, October 22, 2013
WOW!!!!.This is simply sensational!!!!.The music is as usual first
class and a bit more...the intro guitar is unique, immensely beautiful and
absolutely fantastic!!!.The rhythm is superb; the male vocals are robust
and highly commercial. The female vocals ...WOW!!!!...JUST SIMPLY BLOWN
AWAY!!!!..They are aesthetically beautiful, exquisite and absolutely
sensational!!!..We are listening to one of the world’s most beautiful,
finely crafted masterpieces!

Vasant Pusalkar on Tuesday, June 22, 2010
Dear ananthu1996, Ilayaraja's contribution to the song with the guitar
piece is a published fact. Lata always said that Salil's tunes are
different that others. When Dattaram was called for giving "Thheka", He
asked Salilda what type he wants. Salilda replied that you can listen to my
tune and decide yourself. Dattaram gave a totally different Thheka for
Madhumati. This fact was told by Dattaram himself to me and it is recorded
in his DVD too.