Video of this song from youtube
Average Rating : 4.82
Total Vote(s) : 17
Please rate this song between 1 star and 5 stars (5 stars being the best). Just move your mouse on the stars above and click as per your rating. Your rating will really help us to improve our website. 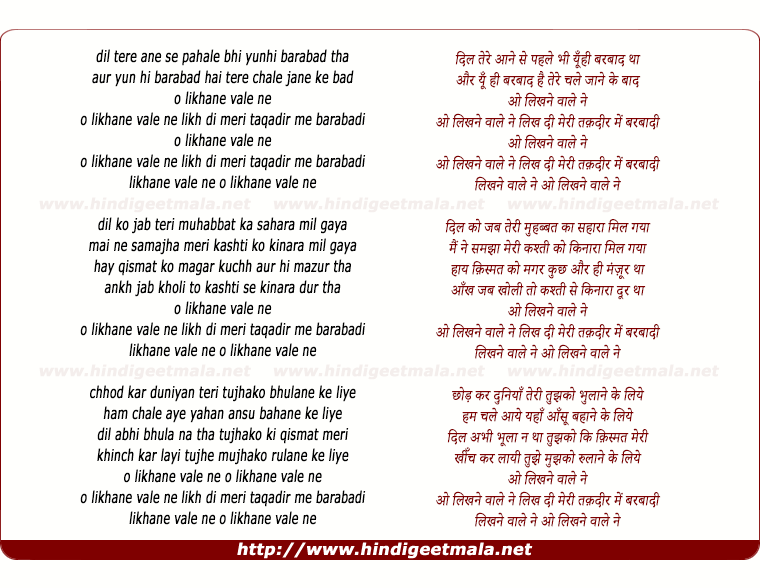 Comments on song "Dil Tere Aane Se Pahale, Likhane Vaale Ne"
rumahale on Monday, July 06, 2009
Thank you for the interest shown. The other video "Woh paas rahe yaa door
rahe" is available on my page, posted on 20-5-2009. Thanks.

rumahale on Sunday, January 29, 2012
@rameshbabuheritage Thank you for the keen interest shown and touching
comments. I am trying to put a Playlist on Suraiya songs.

Rameshbabu Babu on Friday, August 26, 2011
god has sent suraiya ji to this world as an engel to sing with her ever
green golden voice ...more than gold ...we are lucky to have suraiya
sing to us i request u tube and other uploading kind hearted and loving
persons to put entire suraiya songs at a place/ one album thanks one again
ramesh babu warangal hydsrb@yahoo.com

umraochalsani on Sunday, July 05, 2009
Wow. At last. You are so kind to post this video. One of the best of
Suraiya. What wondeful compositions in Badi behan!!! Unforgettable. another
best of Suraiya in this film, Woh paas rahe yaa door rahe

umraochalsani on Tuesday, July 07, 2009
Ya, I saw that too and immense thanks to you for that too. The film "Badi
behan" , if it had come a few years later, it would have won best music
award of filmfare hands down. you agree?