Video of this song from youtube
Average Rating : 4.60
Total Vote(s) : 53
Please rate this song between 1 star and 5 stars (5 stars being the best). Just move your mouse on the stars above and click as per your rating. Your rating will really help us to improve our website. 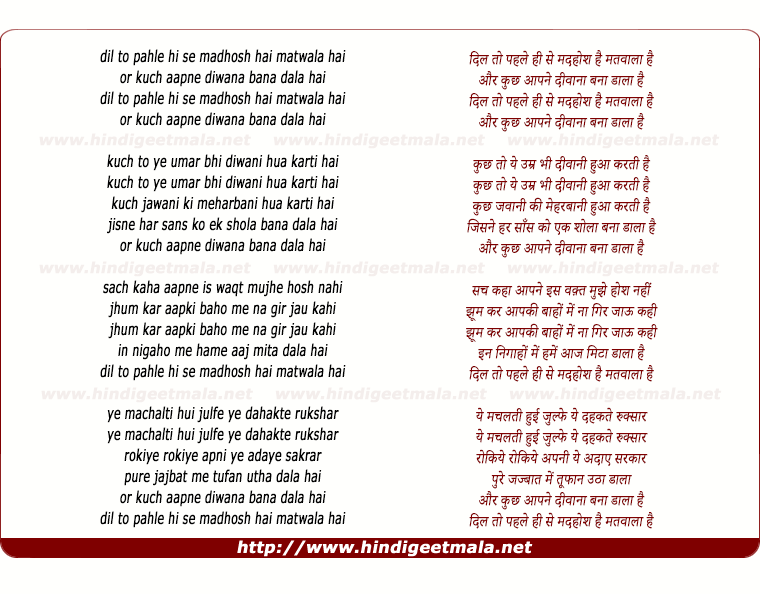 Comments on song "Dil To Pehle Se Madhosh Hai Matwal Hai"
Moe Ali on Monday, November 23, 2015
At the top of the music world in Bollywood, O.P.Nayyar was a magician,
maestro and an unrelenting romantic. The tunes, the lyrics, the music and
the voices all magically come together to an amazing array of simple
instruments and a background theme in these eternal songs. Jeuo OP, in the
everlasting flame of romance and songs. You will always shine in the eyes
of music lovers and it is Nirvana to the music ears of ours.﻿

Dilip S. Coulagi on Thursday, April 04, 2013
OPN magic indeed! Who was the poet? Tanu looks so beautiful in this movie I
wonder why she chose to be a comedienne rather than a romantic
heroine.

Dilip S. Coulagi on Sunday, November 30, 2014
Do mention the name of the lyricist. A lot of the credit for the quality
of the song goes to the poet!﻿

Almas Mohammad on Thursday, November 19, 2015
it was infortunate for music lovers that from 1967 end till 1970 opnayyar
did not use rafi as for once rafi was recording for sj and got late he had
given a time of 10 but for delay from sj reached at 1 or 2 and told the
truth that he was held up by sj and was sorry opnayyar was a egoistic
character and he got angry that he had to wait from then on he took mahedra
kapoor who himself was late 1st day﻿