Video of this song from youtube
Average Rating : 4.23
Total Vote(s) : 147
Please rate this song between 1 star and 5 stars (5 stars being the best). Just move your mouse on the stars above and click as per your rating. Your rating will really help us to improve our website. 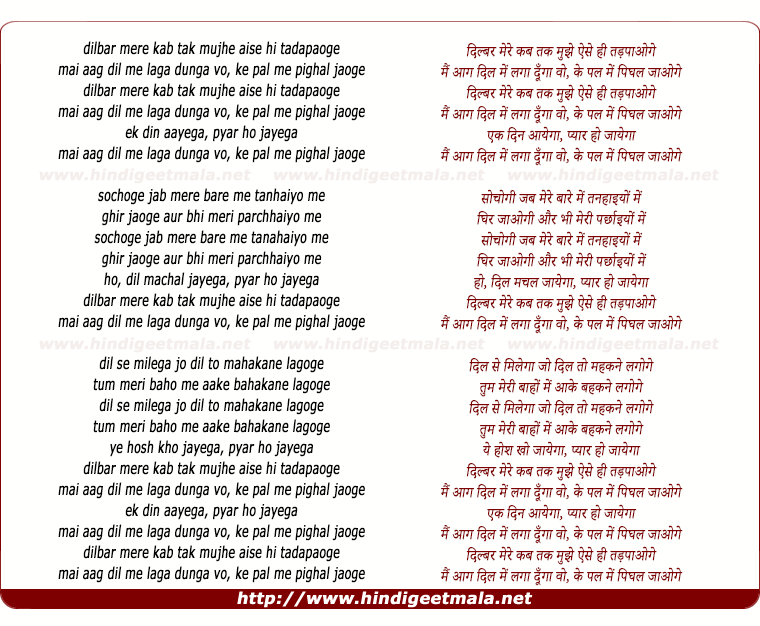 Imran iqbal on Thursday, September 09, 2010
you listen it,, you like it,, you fall in love with it.. you have
catharsis.. overflow of emotions.. go back to your past... dig out the good
times.. celebrate with this song.. and when there is nothing but a smile on
your face... capture the moment.. it may turn out to be the one best
moment.. oh my God we all fall in love in life once!!!!

shaanju on Sunday, May 19, 2013
I start to fall laughing when someone is dragging Atif Aslam here, Atif
like singers are available in every corner of any streets in any country
but Kishore Kumar like singers are very rare and are the real gems. My
request to people don't insult Kishore or Lata type of singers by comparing
them with all those tom and harry..

surya narayan Das on Saturday, May 18, 2013
atif? who is that? Comparing with Kishore da with atif is big insult? Its
like someone comparing Fardeen Khan acting with Big B. Think million times
b4 talk these craps. atif is a singer, Kishore dv was,is and will be the
best singer ever. Don't compare even in your worst dreams.. Its a personal
request.