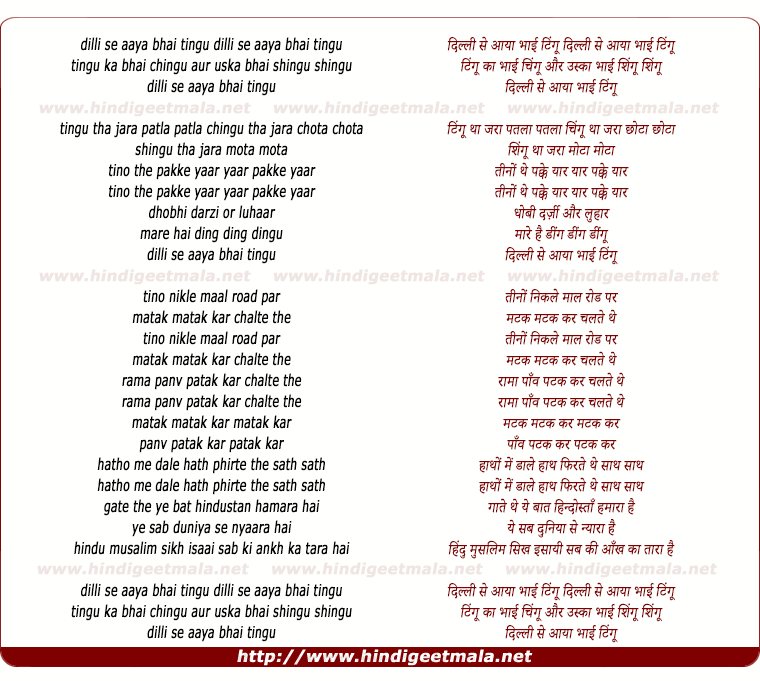 Comments on song "Dilli Se Aayaa Bhaai Tingu"
orientlover1 on Tuesday, December 28, 2010
The heroine of the film Meena Shorey 1:35 & 2:02 sitting at the table on extreme right, died in abject poverty in Lahore in 1989. She had blood cancer and was admitted into the general ward of Mayo Hospital. Of the new generation nobody knew her but one day a senior doctor recognized her. Next morning news broke in the press. She was sent abroad for treatment but all in vain; she died soon after. She married 4 or 5 times in her life. She hailed from Raiwind - a town near Lahore. Posted from LHR.
orientlover1 on Saturday, May 08, 2010
@surjit1234 yes,her appearance has changed due to time period in between the two movies, hair style, dress etc. In this song there is no close up of her's but in Awara song she appears in many close up shots. There, despite wearing a sari she appears to be of European race with brown/blue eyes and brown hair. I think she was "Anglo-Indian". I have not seen her in any other movie. She should be in her late seventies now, if still alive.
orientlover1 on Monday, January 31, 2011
@9764048302 You are right, he is the same. I think the girl sitting at the piano at 0:13-0:15 is Vinod's niece.
orientlover1 on Monday, March 22, 2010
The woman singing this song can also be seen singing "ek bewafa se piyar kiya" in film Awara
Jagjit Singh Ishar on Wednesday, February 17, 2010
once in a live program lata ji hd highly praised vinod & his compositions.
we r unlucky 2 loose this talented gem. may his soul rest in eternal peace.