Video of this song from youtube
Average Rating : 4.12
Total Vote(s) : 831
Please rate this song between 1 star and 5 stars (5 stars being the best). Just move your mouse on the stars above and click as per your rating. Your rating will really help us to improve our website.

o what a look, what a grace
tenu hi kara main chase
what a naach what a nain
dil tera ho gaya fan
what a smile, what a style
lutegi tu ????
kabhi soft kabhi rude kinna tera attitude 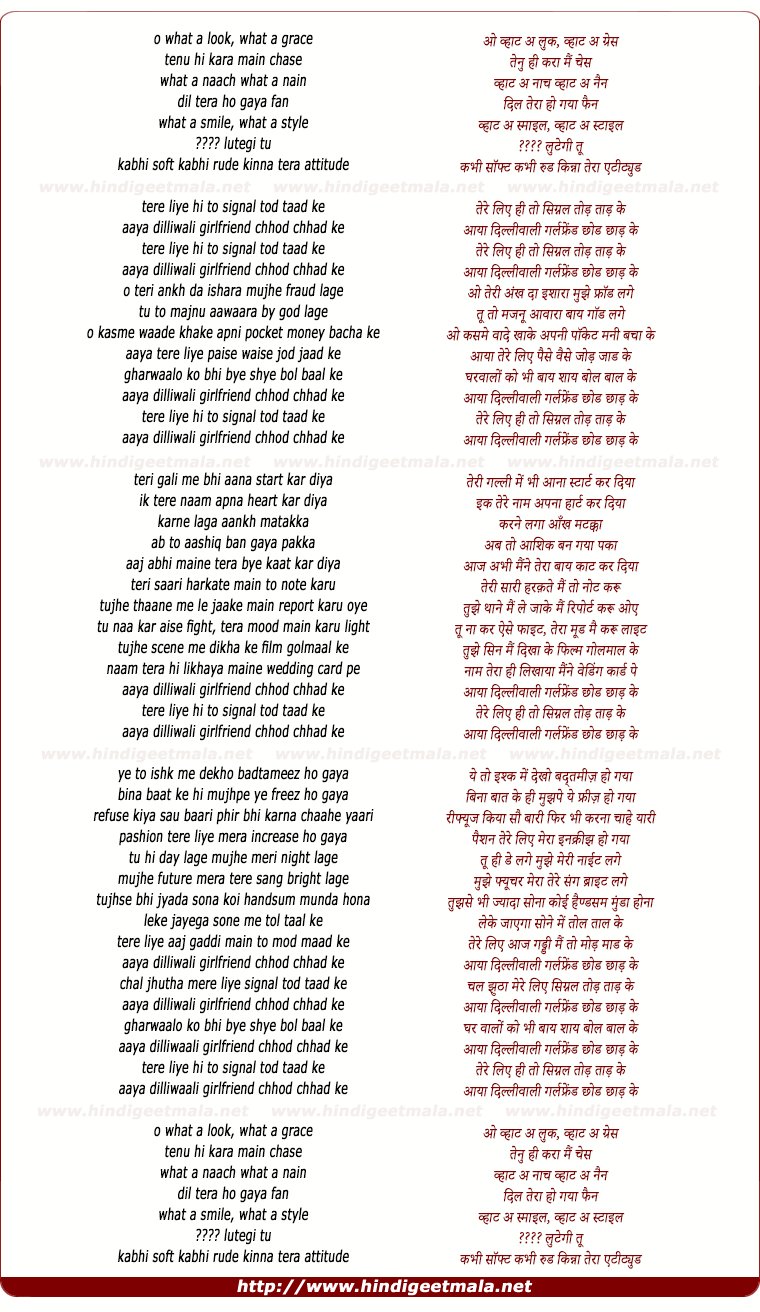 Comments on song "Aaya Dilliwali Girlfriend Chhod Chhad Ke"
kkkat09 on Wednesday, May 08, 2013
Ranbir and Deepika are seriously by far my most favourite Bollywood Jodi. I
honestly wish they were still together because their chemistry is
undeniably the best. I still think they are totally meant to be!! I mean,
just look at the way they look at each other. Love them both. Have been
replaying this song as much as I used to replay Khuda Jaane. I just LOVE
Ranbir and Deepika. PLEASE get back together!!! Can't wait for this movie
to release.

downeycell on Thursday, April 25, 2013
deepika is looking gorgeous...ranbir is a great actor n looks very
attractive but hate his enophthalmic eyes... and salman n srk r so super
popular not only because of their on screen persona but also because of thr
super duper off screen persona..Ranbir is a good actor but lacks off screen
magnetism..So plz dont compare him to Salman or SRK.. those guys have
achieved way to much in life..

Charvi Singh on Friday, April 26, 2013
I didn't even notice Deepika can't understand whats the fuss about as she
has looked 100 times better than this in other songs. I was so busy
watching Ranbir's awesome dance steps.He was always a good dancer but this
movie gave platform to his amazing talent.He's looking great in that silver
kurta :)

Jaya Tulsiani on Monday, April 29, 2013
I have developed a syndrome of listening songs of YJHD. Truly addicted!
Whether it is batameez dil or balam pichkari or dilliwali
girlfriend..all are on replay button. And now the music has released
.so now i'm goin to be at last stage of this disease. The whole day i'm
listenting to these songs on TV ,Mobilephone, PCetc .Pritam u r the best .
This is the best album after Race2 and Ashiqui2.

Jaya Tulsiani on Tuesday, April 30, 2013
Who r u to say about RK like that? U r playing safe by posting ur views
here. Tell this in front of the whole crowd,they'll smash u. I think u r
shahid's fan. He's nt working well after JWM. It was a hit bcoz of
Kareena's performance. Shahid is in the industry for 9-10 yrs, how many
awards he has won can u name them or any critical and commercial sucess as
compared to RK