Video of this song from youtube
Average Rating : 3.47
Total Vote(s) : 32
Please rate this song between 1 star and 5 stars (5 stars being the best). Just move your mouse on the stars above and click as per your rating. Your rating will really help us to improve our website. 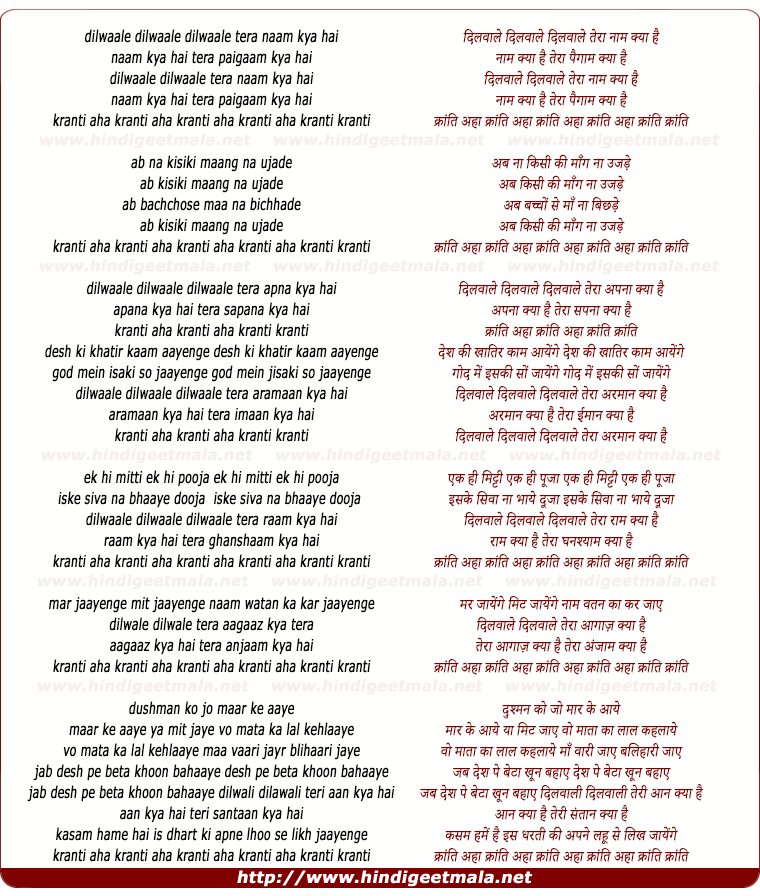 Comments on song "Dilwale Tera Naam Kya Hai"
janingrigory on Thursday, July 24, 2008
This was a very good patriotic and political movie with a big star cast. One of Hema's biggest super hits to date and she did an excellent job in the role as the princess turned wife of a true revolutionary who leaves behind her glamorous life to join her husband in his fight for freedom & finding justice for his people. Hema looks divine & exudes such a pure essence in picturizing a very meaningful song. Love the politically themed films.

Great song and clip. Thanks for the upload!

janingrigory on Thursday, July 24, 2008
In Kranti, Hema got to work with her favorite actor, Dilip Kumar, since she had admired him for years and desired to work with him. This film was such a melting pot of great legends such as the glorious Hema Malini, Dilip Kumar, Manoj Kumar, Shatrughan Sinha, Shashi Kapoor, etc.
achoo302 on Thursday, June 16, 2011
Yusuf baba aka dilip kumars role was untouchable, his acting, dialoug delivery, and style add another dimension to this film.

menaz1 on Saturday, August 04, 2007
can someone please upload the full movie. i haven't watched it for years and searched for it but not found it. i'd appreciate it very much. Thanks x
harjapbhangal on Monday, January 03, 2011
This is one of the only songs to have rafi, kishore, mahendra kapoor, lata,
and mukesh.