Average Rating : 4.46
Total Vote(s) : 35
Please rate this song between 1 star and 5 stars (5 stars being the best). Just move your mouse on the stars above and click as per your rating. Your rating will really help us to improve our website. 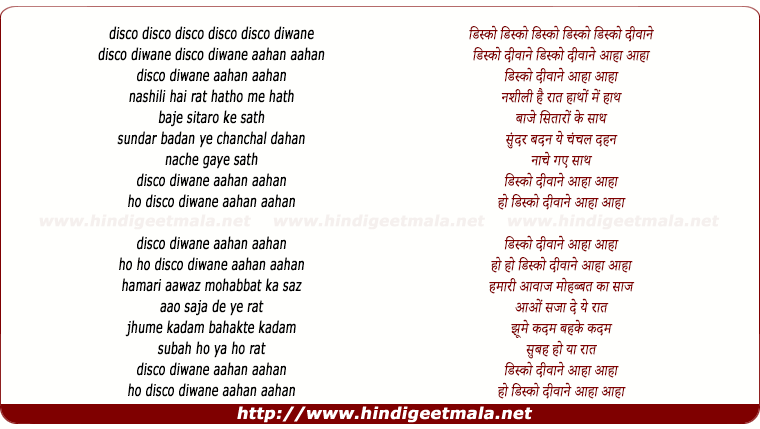 Comments on song "Disco Deewane"
Haris Durrani on Saturday, September 29, 2012
No one can duplicate their songs...originals are the best...Still in love
with Nazia and Zohaib Hassan

Prashal Goyal on Friday, October 05, 2012
u mean orthodox?? and that song maybe in nowadays.but mark my
words..those who have listened to the previous song first will say that
karan johar absolutely ruined this song.reinventing songs is fine, like
khoya khoya chand in shaitan. ruining them is not

libra92810 on Saturday, September 01, 2012
dont mind dear but i think anushka looks like her not she looks like anushka...there is a big difference if u understand...anyways she is the legend... she was the singer who sung aap jaisa koi in feroz khan movie .truely icons...may her soul R.I.P
Amar Singh Shingari on Sunday, April 21, 2013
Wow.Never knew this song was sung by Nazia Hassan.Too Good...Thanks
Nazia ji and RIP where ever you are...I always thought Mithun Da and Bappi
Lahiri ji bought Disco genre in 80's...But never knew it was Nazia ji.

dujaize Duja on Sunday, June 14, 2015
We miss her
She was 15 whn she won flimfare
Greatest pop singer its her ap jaisa koi meri zindagi mai aye which laid
down the start of pop music in india n pak..
Greatest talent ﻿