Average Rating : 4.82
Total Vote(s) : 22
Please rate this song between 1 star and 5 stars (5 stars being the best). Just move your mouse on the stars above and click as per your rating. Your rating will really help us to improve our website. 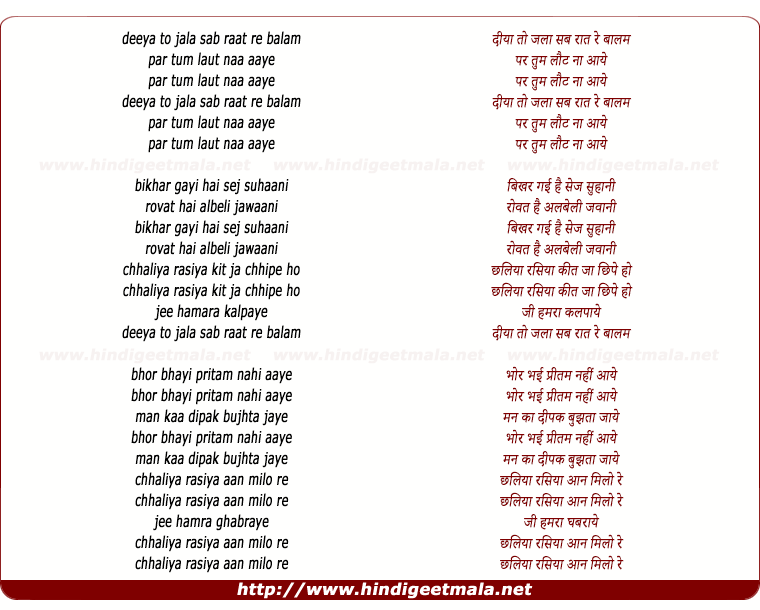 Comments on song "Diya Toh Jala Sab Rat Re Balam"
motandas1 on Monday, June 29, 2009
Great song, great voice. The same composition was sung by Manmohan Krishan. Do you have that song? Please do up load that sone also. Thanks. One of my requests is already pending with you. I want the song from film DIDI "Pyar He Mujhe Darkar Hi. Have you found it somewhere?
V. Siddhartha on Wednesday, May 27, 2009
What a voice CHA had, as if it was meant to convey every suffering soul's
pain, and comfort it by the mere act of that expression! When good musical
voices give vent to feelings of pain, they paradoxically calm our souls.
Beautiful post again, Mirzaji. Thanks.

nandu1f on Friday, May 29, 2009
I was dying to get this song on YouTube. Beautiful montage. Thanks so much,
Mirzaji. CHAtma's voice has such "durd" in it and so sweet. And such an
unusual composition from OPNayyar ji. Upon hearing it, one can never
"forget" such song and singing.

motandas1 on Wednesday, December 23, 2009
"Preetam Aan Milo" was written by Saroj Mohini Nayyar and its music was composed by her husband O P Nayyar.
Vinod Bhardwaj on Sunday, July 31, 2011
Thank you very much for this upload. have been looking for this song for a
long time, as I could remember only the first stanza. Now I have listened
to the whole song after a very very long time. thanks. Vinod Bhardwaj