Video of this song from youtube
Average Rating : 4.31
Total Vote(s) : 98
Please rate this song between 1 star and 5 stars (5 stars being the best). Just move your mouse on the stars above and click as per your rating. Your rating will really help us to improve our website. 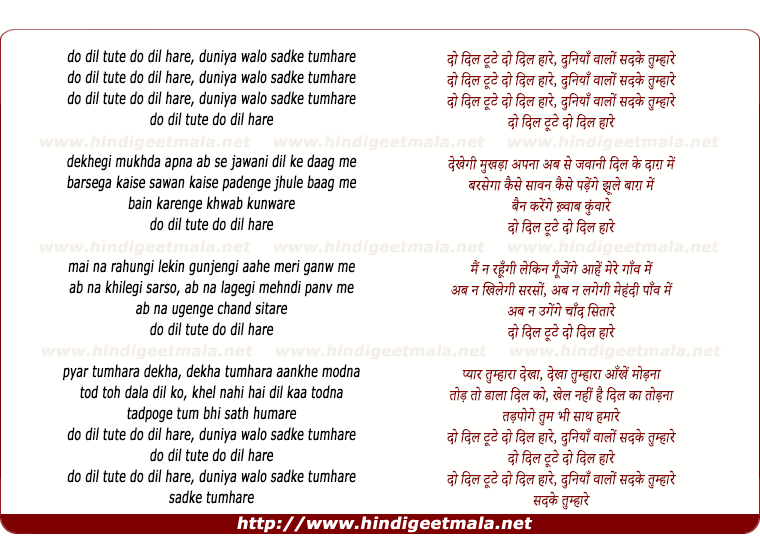 Sanjeev Katoch on Wednesday, July 29, 2009
Priya Rajvansh and Chetan Anand brother of Dev Anand, had a personal
relationship. After Chetan Anand's death, in 1997. She was murdered on
March 27, 2000 in her home in Juhu, Mumbai, India. Police charged Chetan
Anand's sons Ketan Anand and Vivek Anand along with their employees Mala
Choudhary and Ashok Chinnaswamy with her murder [2]. Their motive was
thought to be rights to her inheritance of Chetan Anand's property. Four
accused were convicted and sentenced to life imprisonment in July 2002

Sanjeev Katoch on Friday, July 31, 2009
Yes Very Very Sad! Her father was on a UN assignment and she mostly stayed
abroad before coming to India in the early 1960's. She is known to have
trained at the prestigious Royal Academy of Dramatic Art (RADA) in London,
UK Chetan Anand, cast her in his film Haqeeqat. He had just separated from
his wife; Priya was many years younger and very beautiful and the two grew
close to each other. She starred only in Chetan Anand films.

Jagmohan Singh on Monday, February 08, 2010
A very very sad and heart touching song by the music legend Lata
Mangeshkar.The composition is super hit,the composer Madan Mohan ji is
unmatchable.He is the best musician of his time.The screen performance
shows as she knew in advance about the forthcoming tragedy in her actual
life.

Khurram Tariq on Friday, May 22, 2009
thats gr8 you must proud on lata ji she had sung this song to us thats gr8
awesome very best song i had ever listen i love this song thnx lata ji