Video of this song from youtube
Average Rating : 4.00
Total Vote(s) : 15
Please rate this song between 1 star and 5 stars (5 stars being the best). Just move your mouse on the stars above and click as per your rating. Your rating will really help us to improve our website. 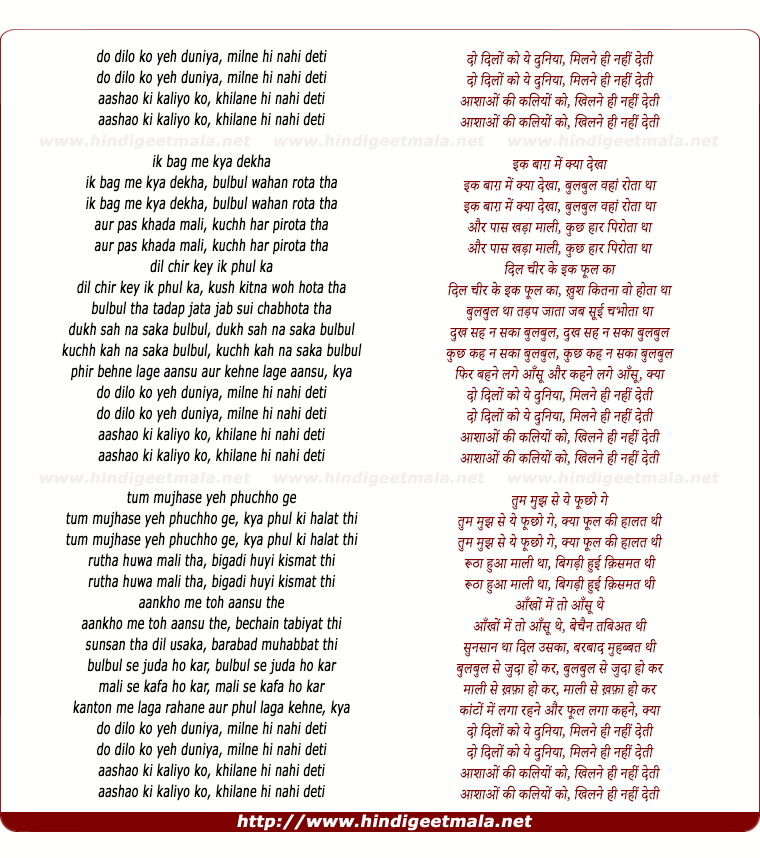 Comments on song "Do Dilo Ko Ye Duniya, Milne Hi Nahi Deti"
rafisolanki on Tuesday, May 10, 2011
Thank you very much for feed back of my comments,Khan sahib.My birth year is 1942.In 1955, i had adolescent love with a good looking,beautiful girl,who had utmost desire to marry me,but when she grown up, her parents got her married else where,and fate parted our ways.Thus,sad romantic songs,always take me to the past, the reminiscences of my love at the first sight.Really, one has said rightly, that the literature and poetry are nothing but reflections of the human life.
rafisolanki on Friday, April 08, 2011
I like the songs composed by the MD Husnlal and Bhagatram." Ruth huwa mali tha, bigadi huee qismat thi" song is full of meaning, which vibrates the heart.Song writer,Qamar jalabadi, has given the lyrical feelings of the young hearts,,fallen in love.This is the very nice and sweet song of late forties.Pre independance songs are unparrel and unique in their spirit.I express the vote of thanks for uploading such a beautiful song which may like to listen again and again.
Bhavesh Desai on Thursday, June 13, 2013
Chand {26th May 1944}: Prem Adib, Introducing Begum Para, Sitara﻿ Devi
Kanpuri, Also Introducing Sapru as Begum Para's rich﻿ Father, Ram Singh,﻿
Shashikala, Balakram,﻿ Beena Paul, Rane, Ganpatrao, Manajirao, Thakar,
Karhadkar, Bhide, Vatsala, Shaikh; Lyricist: Qamar Jalalabadi; Music
Director: Husnlal Bhagatram; Singers: G.M.Durrani, Zeenat Begum,﻿ Sitara
Devi,﻿ Manju,; Producer: Prabhat Pictures / G.B.Ghanekar; Director:
D.D.Kashyap

Bajaury on Wednesday, April 24, 2013
Mera mizaj ladhakpan say aashiqana hay. My relative was in love with a
young girl, he was 13 and she was 12. When she got older her marriage was
arranged with another man. At the wedding night he and one of his
accomplices scooped the girl and took her. Later he married her. She was
his second wife but he was willing to get her at any cost. He paid a hefty
price but het his love. Sad- you did not get your love.