Video of this song from youtube
Average Rating : 4.26
Total Vote(s) : 1785
Please rate this song between 1 star and 5 stars (5 stars being the best). Just move your mouse on the stars above and click as per your rating. Your rating will really help us to improve our website. 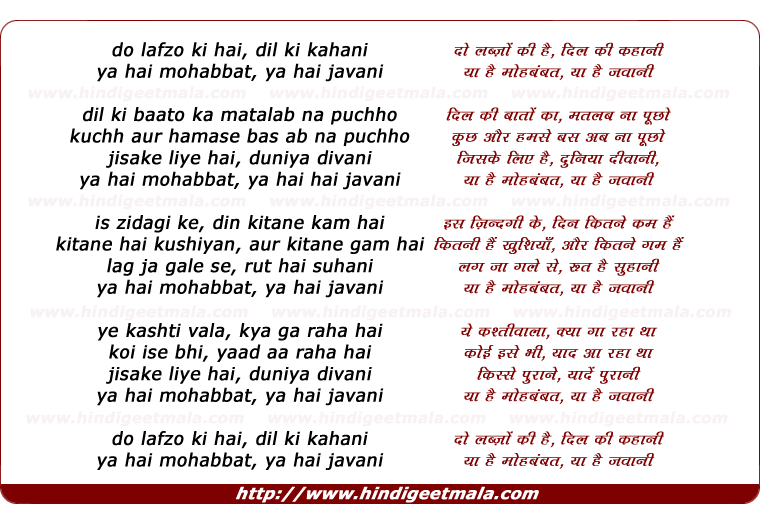 Comments on song "Do Lafzon Ki Hai Dil Ki Kahani"
0point00 on Tuesday, April 03, 2012
yes, anyone can go to Itwofs website and check them. Even the "copies"
listed in that website are usually far from being direct lifts and when
they are, they are usually very brief - like in O-Maria. And do you know
1>Mozart copied Bach, Haydn; Bach copied Vivaldi, Handel; more or less true
for all musicians. 2> German Singer Die Flippers copied RDBurman song
"chala Jaata hun" in "goodbye eloaiza" 3>The song Dum Maro Dum was used in
the game GTA and is very popular among the gamers.

0point00 on Tuesday, April 03, 2012
How could all his songs be lifts, if many were based on indian ragas? And
if he is so bad, then how come his songs made him such a superstar demigod
and the original songs were unable to make big names? May be he made those
better, by remixing them? Mixing, DJing, these are skills too! Some of his
supposed "copies" were not even that close . Chura Liya uses different
notes than Belgium song. They even don't bring the same mood. Chura Liya
hai is 100 times better.

Reincarnation on Monday, June 30, 2014
a fabulous melody.so catchy that it lingers in your mind for days after
hearing it.
asha ji's voice is so lilting and captivating, one can get drunk on it!
she really is unique. i thank the mother-divine for creating and
sending her to us.﻿