Video of this song from youtube
Average Rating : 4.39
Total Vote(s) : 36
Please rate this song between 1 star and 5 stars (5 stars being the best). Just move your mouse on the stars above and click as per your rating. Your rating will really help us to improve our website. 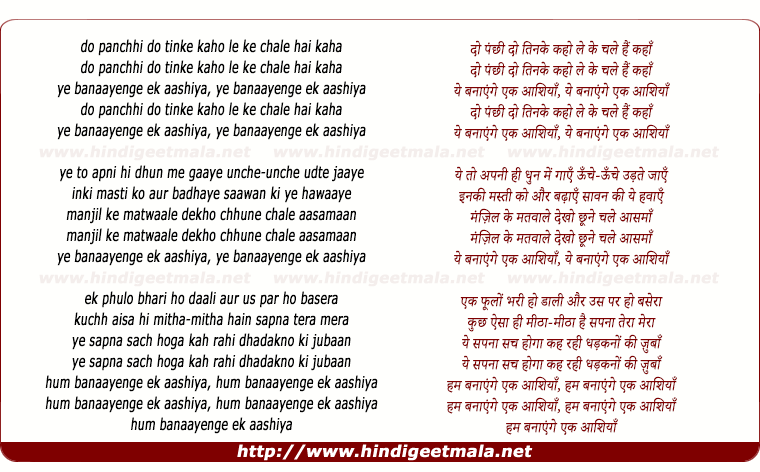 Comments on song "Do Panchi Do Tinke"
RealMusicKing on Monday, July 04, 2011
Singers: Kishore and Aarti Mukherjee

swaraj prasad on Monday, February 23, 2015
Arati mukherji was downed by the Lataji. In the lata era, she told all the
songs should be sung by her. If they didn't do that, she wouldn't be able
to sing any song of the movie. So, if there is B grade or cabaret dance, it
was taken up by Asha bhosleji. Then, where Aratiji would have got chance?
Persons think Lataji is great. but, she turned whole music industry into a
monotony specifically in the 60's and 70's. There should be variety of all
voices. Why persons think that every song is only sung by me. Lataji voice
is high pitch, Mubarak begum is also same. but Ashaji voice is low pitch,
same as Aratiji voice. If u listen the song ''shyam teri bansi '' from
movie ''geet gata chal'' , very unique because this type of song must be
sung by low pitch voice.Meanwhile when Ravindra Jainji gave chance to sing
a song from movie ''RAm teri gana mali ho gay'', the song ''ek radha ek
meera'', oh my god! the voice and pitch is so much high that it doesn't
suit o f that song. It should be sung by Aratiji, then it would be better.
Same way, song ''raski balma'', ''mohe bhul gaye sawariya'' was the
brilliant masterpiece song of Lataji which can be only sung by her. If u go
to male versatality, there is no zealousness, Md Rafiji has no problem with
Kishore da and Kishore da had no problem with Rafi da. Even in osme movie,
kishore da is acting but song given by rafi da. And, there was Mahendra
kapoor, different voice, Manna de, very much soft voice and so on. Perhaps
this type of versatility persists in female singers, then hindi muisc
industry was totaly different what we are watching today.﻿

kyahampa on Sunday, June 29, 2008
I had looked for this song a few months back but could not find it. A
really sweet song. I must also add that this movie is also very beautiful.
I must have see it on Doordarshan about 25 years ago and distinctly
remember everyone in the room was crying when it ended. A real tearjerker.
Thank you for posting.

Shobha Nivas on Thursday, January 16, 2014
So beautifull..and my favorite all time...specially the Arathy Mukherjis
voice is too raw and unique.and nothing to say about Kishoreda...he's
supreme in every way and none can take the notes as he does...and no one
can reach his place or compete with him...only he
﻿