Video of this song from youtube
Average Rating : 4.82
Total Vote(s) : 22
Please rate this song between 1 star and 5 stars (5 stars being the best). Just move your mouse on the stars above and click as per your rating. Your rating will really help us to improve our website. 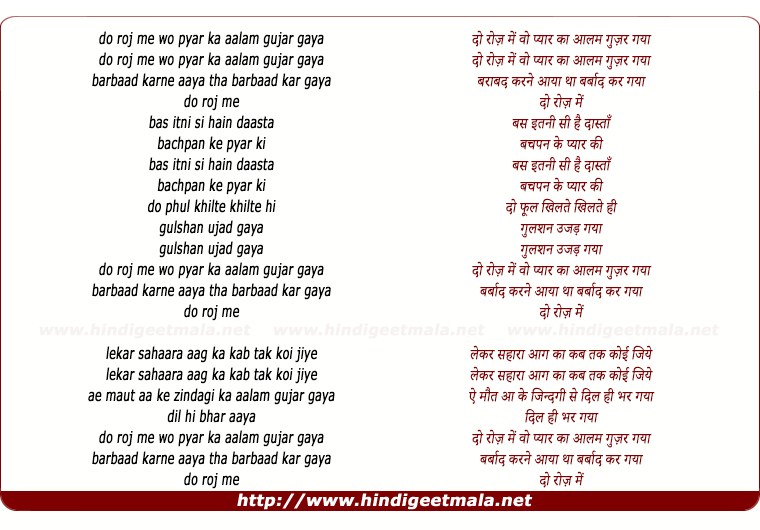 Comments on song "Do Roz Mein Woh Pyar Ka Alam"
peterklus on Tuesday, November 06, 2012
Absolutely, I have missed Mukeshji all these years, since his death in
Detroit in 1976. What a great voice, that tinge of melancholy, which could
be felt even in his happier songs, gave his singing a special quality
unmatched by anyone else. However, he has left us a body of work that can
be enjoyed again and again. I'm very grateful for that. ~ Sudevan

nandu1f on Tuesday, July 27, 2010
One of Mukesh's best. I am listening to this after 30 years, but never
forgot it. ...bas itni si hein dastan bachpan ke pyar ki.. He delivers thsi
with such tenderness. Thanks Mehul ji.

kirti kumar Khanna on Tuesday, December 10, 2013
nobody and i mean nobody in indian film industry from start to present
day a singer had a voice like mukesh jee .his voice just touches the soul .﻿

kirti kumar Khanna on Sunday, September 26, 2010
uf uf what a voice what a top performence by mukesh sahib mukesh je mukesh
jee aap wapis a jao i have tears in my eyes .

TheAnildesai on Tuesday, September 29, 2015
some song !!! just full of pathos and pain. Have gone through all comments
for this song..
what a pity that not a single soul found it worthwhile to give any credit
to music director Kanu Ghosh and lyrisist Prem Dhavan for giving such
masterpiece.Shocking indeed.﻿