Video of this song from youtube
Average Rating : 4.46
Total Vote(s) : 52
Please rate this song between 1 star and 5 stars (5 stars being the best). Just move your mouse on the stars above and click as per your rating. Your rating will really help us to improve our website. 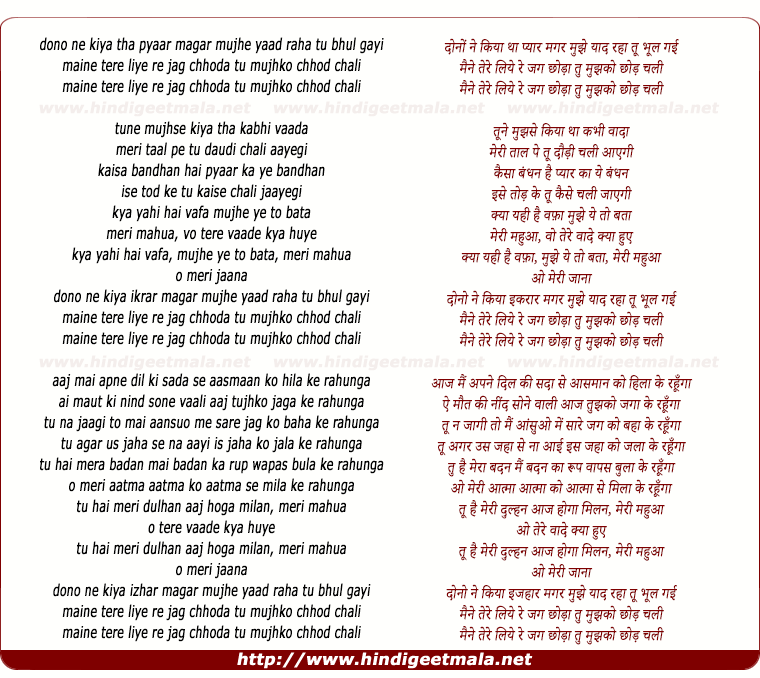 iub4767 on Thursday, March 19, 2015
"Aaj mae apne dil ki sada se asman ko hila ke rahonga...". Rafi db has
reached the asman after singing so many songs from his heart and bringing
joy to our heart..﻿

aarvee001 on Tuesday, August 30, 2011
Hindi Film Songs are NOT Album songs. They are not stand-alone neither the
Lyrics nor the picturisation. They have a context and background emanating
from the Movie. Many great songs have originated from flop movies with
unknown actors or one-timers.Lets keep this in mind and enjoy the song and
the video

mumtaz shah on Tuesday, January 25, 2011
@tusharmane Yes, evan I use to sing this song, as it is one of my
favourite, but after watching the video, I felt exactly like you, In my
opinion the whole concept and visulization was destroyed beyond
imagination, and the 3 grade actor Shiv Kumar and the heroine as disgusting.