Video of this song from youtube
Average Rating : 4.50
Total Vote(s) : 352
Please rate this song between 1 star and 5 stars (5 stars being the best). Just move your mouse on the stars above and click as per your rating. Your rating will really help us to improve our website. 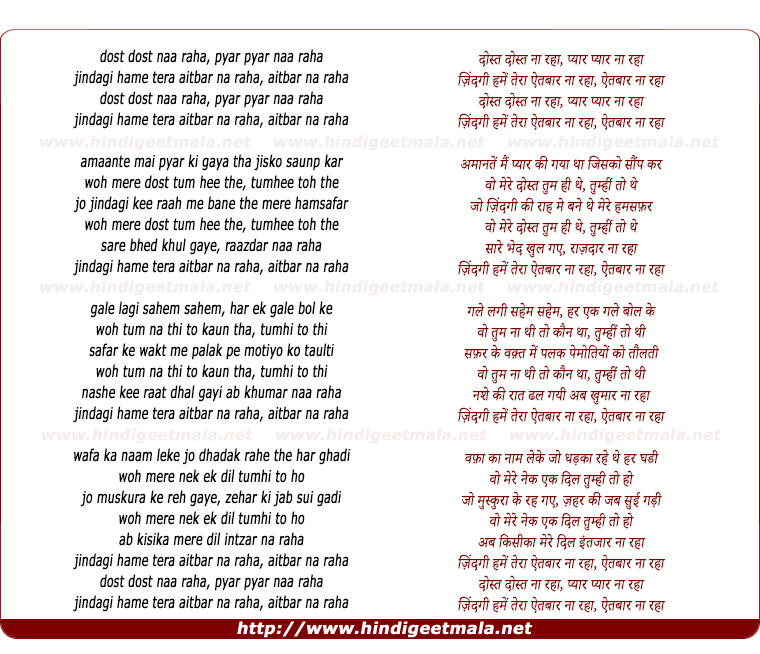 pionyt on Thursday, March 03, 2011
@lnasrif2004 This song is about the feelings of the singer when he thinks
that his closest & best friend, and his wife have been cheating on him
(even though his wife had completely abandoned any past relation with the
other guy after her marriage) ... and he is extremely heart broken because
only these two people were the closest to him and he cannot bear the pain
that they only would cheat him.

billy sagoo on Thursday, August 06, 2015
Sangam = Dost Dost Na Raha Pyar Pyar Na Raha = Mukesh Legend Singer.
The Life is not to trust your Friend & destiny what is around the corner
bring you passion Love Romance Romantic Destroy by who you Trust you Can't
Predict Love & Trust Beautiful Song Not to Forgive & Forget ?x UK﻿