Average Rating : 4.35
Total Vote(s) : 31
Please rate this song between 1 star and 5 stars (5 stars being the best). Just move your mouse on the stars above and click as per your rating. Your rating will really help us to improve our website. 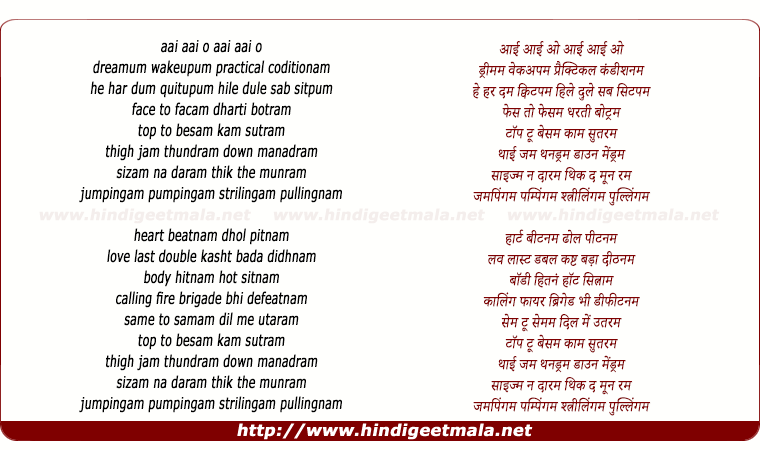 Comments on song "Dreamum Wakeupum Critical Conditionum"
donnaforeverful on Wednesday, November 28, 2012
rani is the most awarded actress in the country right nw. and she definitely deserves to be so. this is just the cherry on the cake. SHE DANCES WAY BETTER THAN THE NEW CLOWN OF ACTRESSES.
swagoobwa on Saturday, October 06, 2012
Oh Yes!!did you know that dinosaurs are extinct...!! Are you still in your
imaginary world or been sleeping? Hindi movies is losing its touch... that
is why to keep the market strong they make remakes. They have lost the
intensity and good actors. There are only good looking heroines who make
the lil profits. Recently Abhishek Bachchan bought rights of a tamil song
for 95 lacs (Disco Raja), for his new film (budget worth 6 cr). Haha.. ur
dinosaur seems to be like a 'razor sharp teeth' liliput.

Aakash Gautam Mukhopadhyay on Wednesday, October 10, 2012
I simply love rani. She certainly has proved herself as one of the best
actresses Indian cinema has produced. I'm just worried that I find a
similarity between Aiyyaa and Dirty Picture. has Aiyyaa come before
DPicture then I would have been sure that it would have been a blockbuster,
'coz whatever the storyline may be, Rani would have given a superb
performance. I have my fingers crossed. Hope Aiyyaa does really well in the
box office!! P.S. Rani's bellydance in Aga bai is the best ever!

attitudego on Monday, October 01, 2012
She says she likes men with a darker skin tone...I mean, isnt that good..
Never heard it from any other heroine...N yes, Im a south Indian... Yes,
its wrong to assume that all south Indians are dark, just as it is wrong to
assume that all north Indiands are fair. But my point is ..Why get
insulted when someone cals u a darkie??? DARK, SOUTH INDIAN and PROUD...
:) P.S: Pretty much all Indians luk really dark when compared to
Europeans..:p.So much for our superiority complex.

kronosaphrodite on Thursday, October 25, 2012
Very sorry to have offended you. I was not stereotyping and neither being
pompous. I was only replying to that dumb lad in his own lingo! Color of
skin, hair, eyes, features are all due to your genetics not based on any
religion/caste/nationality. I am first and foremost a HUMAN BEING, not a
South Indian, Brahmin or even an Indian! These labels have been given to me
by society. I only see the color of one's heart not the color of one's skin!