Video of this song from youtube
Average Rating : 4.43
Total Vote(s) : 14
Please rate this song between 1 star and 5 stars (5 stars being the best). Just move your mouse on the stars above and click as per your rating. Your rating will really help us to improve our website. 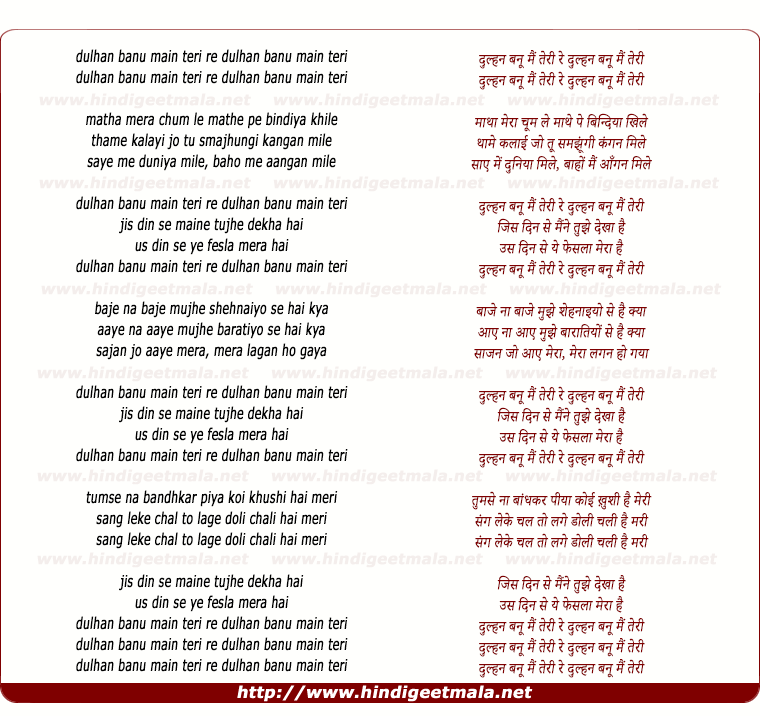 Comments on song "Dulhan Banu Main Teri Re"
Thej Wagle on Friday, July 06, 2012
If you have a person u hate too much, then show him this song/film. U dont need to hit him or kill him. This movie will do all that u want & legally.

He will never talk to u in his life. He even may suicide, but b careful, he may put ur name that u showed him this film and that's the reason he decided enough of life.

Poor DEEPTI, was so beautiful, but her career was crap. God why did you do this?

But if you have a person u hate too much. Then showm him this, since u dont need to hit him or kill him.

This movie will do. He will never talk to u in his life.

Liakot Ali on Thursday, November 18, 2010
This film was actually Decent, Although it was a slight copy of Famous 1985
film Ram teri ganga maili

Reshma blom on Monday, October 12, 2009
movie name is dulhan banu main teri i like this moie especialy i was in
love then reshma

dbx234 on Wednesday, April 15, 2009
deepti is janam me to nahi mil payee agale janm me to jaroor pelunga tujhe
View all 9 comments related to song Dulhan Banu Main Teri Re