Video of this song from youtube
Average Rating : 4.85
Total Vote(s) : 33
Please rate this song between 1 star and 5 stars (5 stars being the best). Just move your mouse on the stars above and click as per your rating. Your rating will really help us to improve our website. 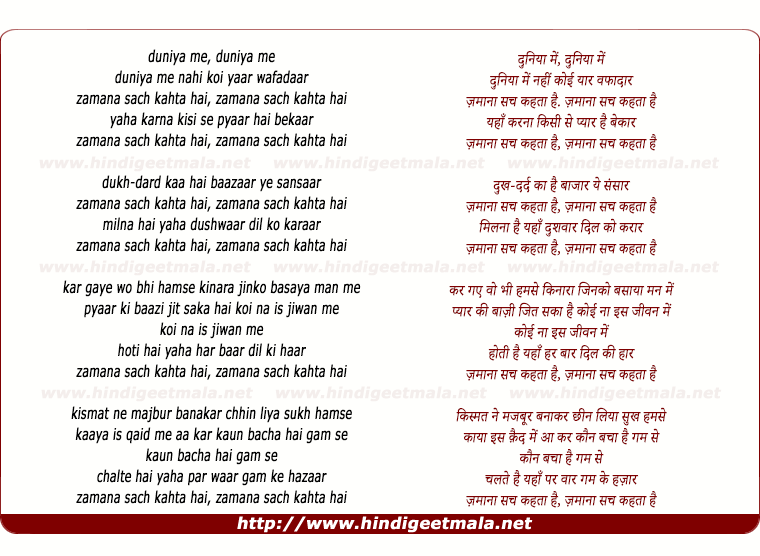 Comments on song "Duniyaa Men Nahi Zamaanaa Sach Kahataa Hai"
Zil Hasnain Kazmi on Wednesday, December 22, 2010
I am being ecstatic and empowered by this song. Excellent composition,
immortal duet by Lata Mageshkar & Late Mohammad Rafi Sahib.He was a
legend.There is a belief of reincarnation, but I am sure no body can
replace him. He was an unique figure. His services will remain alive.He
will be remembered as a great legend in the hearts of hundreds of millions
of people of this world. His calibre and qualities are unique. "No body can
even touch a dust of his shoe, said Sonu Nigham once"(22nd dec 2010)

mrshahcph on Wednesday, April 18, 2012
The JORHI of LATA & Rafi sahab is unmatched till date. The texture and tone of the voices are amazing---it touches the soul with its depth, smoothness and magnetic sweetness. Truly the greatest singer of all times on the planet! Generations to come will never hear voices like these two ever again. One of my favourite songs, when ever I listen to it I feel some hidden comfort. 18.04.2012
Glow of Hope on Monday, February 01, 2010
Movie: Ambar (1952) Cast: Raj Kapoor, Nargis Lyrics: Shakeel Badayuni
Music: Ghulam Mohammad Singers: Mohammad Rafi & Lata Mangeshkar Great sweet
song by two legends of our time. One of the fews songs by Mohd. Rafi
lending voice to Raj Kapoor. Thanks for making it available.

Noniskia Noni on Sunday, April 24, 2011
Just listen to Rafi Sahab taking over the song away from Lata and taking to
utmost heights with his soft,sweet, velvety, melodious, deep voice. The
difference is so obvious. Rafi would always overshadow his co-singer in any
of the duets songs. He is Par Excellence.

99farooque on Monday, August 22, 2011
This is a very nice song, Rafi sahab has sung few songs for Raj Kapoor, as
per my kowledge in Barsaat and in Andaaz (1948). thanks for uploading.