Video of this song from youtube
Average Rating : 4.44
Total Vote(s) : 1081
Please rate this song between 1 star and 5 stars (5 stars being the best). Just move your mouse on the stars above and click as per your rating. Your rating will really help us to improve our website. 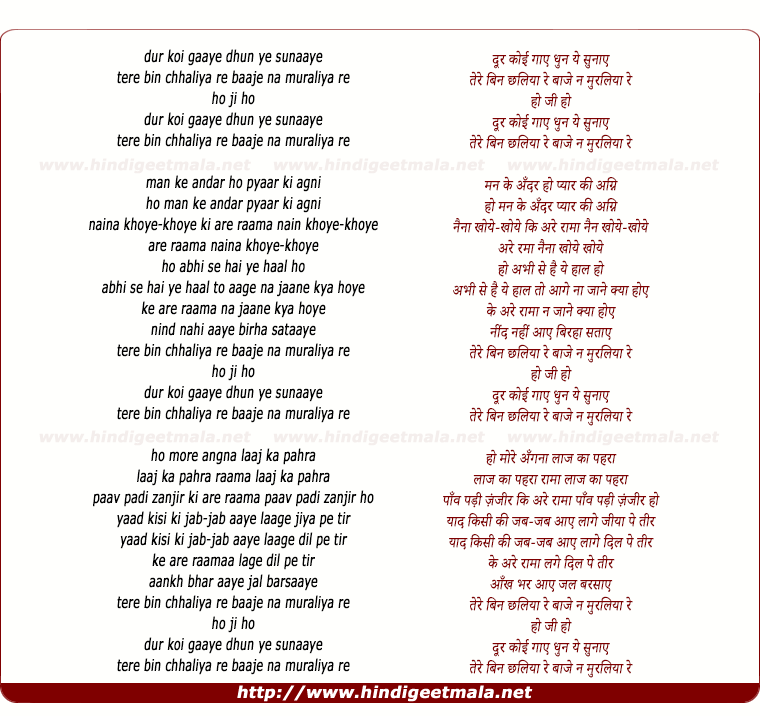 Comments on song "Dur Koi Gaae Dhun Ye Sunaae"
orientlover1 on Sunday, July 25, 2010
The actress singing in the voice of Shamshad Begum with MK was extremely beautiful but did small roles. Unfortunately, she had a big mole in the middle of her right cheek which blemished her beauty (a small mole a on cheek is considered a plus point though). In this song it is not very clearly visible due to distance. Cameramen avoided her closeup shots from right side for this reason. She sings at a mujra in film Chandni Chowk (1954) with Agha and Jeevan in attendance. Also starring MK.
orientlover1 on Sunday, July 25, 2010
I have confirmed from various sources that this actress singing in the voice of Shamshad Begum is Krishna Kumari (b. 1933). She acted mostly in Telugu films and played only small roles in Hindi films.Her biography mentions only three Hindi films: Baiju Bawra(1952), Nagin(1954) and Haryali aur Rasta(1962) although I have seen her in 1954 movie Chandni Chowk and in a bigger role in 1961 film Gharana. Thanks Mahagedara2 for your efforts and interest.
orientlover1 on Saturday, December 11, 2010
@asifsongs The actress we are talking about is Krishna Kumari as I have mentioned above. She does not appear in film Mahel. There are two main actresses in that film : heroine Madhubala and opposite her is Vijaylakshami who plays as wife of Ashok Kumar. Vijaylakshami also appeared in several films. Her most important role is in film Aah in which she plays as Nargis' sister Chandra. She also appears in film Pakeeza but in a minor role as Bibban.
orientlover1 on Thursday, April 28, 2011
@apparaoarani You are right. I do not recognize Telugu film actress Krishna Kumari (as I have never seen, nor was in a position to see, any Telugu movie at all). I only know the one who acted in Hindi films. I have seen the song mentioned by you and it is picturized on Krishna Kumari (Hindi). She also played a significant role in 1960 film Bewaqoof starring Mala Sinha, Kishore Kumar and I. S Johar. (Orientlover posting from Lahore).
orientlover1 on Saturday, July 24, 2010
Could anyone please tell what is the name of actress singing this song in the voice of Shamshad Begum along with Meena Kumari. She appears in the beginning of the song 0.27 to 0.35 and then at 0.56 to 1.10 and then1.20 to 1.47 and keeps appearing for short periods. She has also appeared in Meena Kumari's movie Chandni Chowk wherein she sings at a mujra and in some other movies
View all 45 comments related to song Dur Koi Gaae Dhun Ye Sunaae