Video of this song from youtube
Average Rating : 4.36
Total Vote(s) : 72
Please rate this song between 1 star and 5 stars (5 stars being the best). Just move your mouse on the stars above and click as per your rating. Your rating will really help us to improve our website. 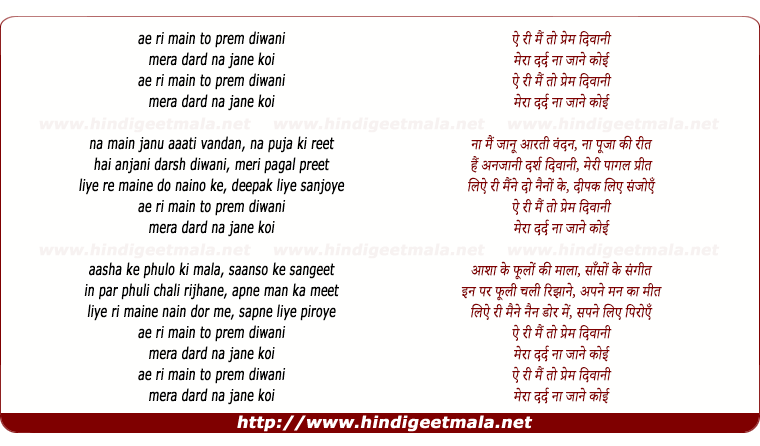 Comments on song "Ae Ri Main To Prem Divaani Naubahaar"
chandrashekharjain on Monday, August 23, 2010
This was my mother's favorite. She used to sing this Meera Bai bhajan withï»¿ harmonium when we were kids.ï»¿ Naturally I am greatly touched listening to it.Many many thanks sir for sharing this song.

V. Siddhartha on Saturday, September 19, 2009
The sweetest of all sweet Lata bhajans ever and perhaps the finest
composition of Roshan, though I love numerous Roshan-Lata gems. A piece of
divinely-inspired work -- I have no doubt about it. You know, the nasal
twang may be unattractive to hear in ordinary mortals, but Lataji had just
a faint touch of it in her youth and it simply makes her voice even more
glorious to me. That was the magic of this incarnation of Saraswati in her
early years.Thanks again, Ajay.

V. Siddhartha on Wednesday, April 08, 2009
Not only is this bhajan the most sublime hymn ever rendered by Lataji, the
dialogue between AK and lovely NJ goes straight to one's heart in its
mixture of NJ's initial hesitation and distrust, followed by her
compassion, and interspersed by light humor between the two strangers. And
indeed all of Lataji's songs in Nau Bahar sound like her anjali to Goddess
Saraswati herself. Just sweet beyond words. Thank you.

nandu1f on Friday, January 17, 2014
Growing up with Shankar-Jaikishan romantic songs, I was not fond of
bhajans. What finally broke the dam for me was Meerabai's bhajans.
Occasional one that caught my attention was like..from "Jhanak2 paayal..".
Years later, it was Meera's intensity and poetry that truly captivated me.
This song is a gift from heaven that is Meera's, delivered by Roshan &
Lata. Unforgettable! Thanks Amitajai﻿

NANDI KHANNA on Friday, June 24, 2011
a fine bhajan picturised on two very good performers.Dilip saab once said
about Ashok Kaumar 'AK is a born actor i am not,i have learnt with
experience over a time&about beautiful Nalini Jaywant'she the only artist
who can emote instantly,her very first take is okayed by the director'.
Thanks for the upload.