Video of this song from youtube
Average Rating : 4.52
Total Vote(s) : 62
Please rate this song between 1 star and 5 stars (5 stars being the best). Just move your mouse on the stars above and click as per your rating. Your rating will really help us to improve our website. 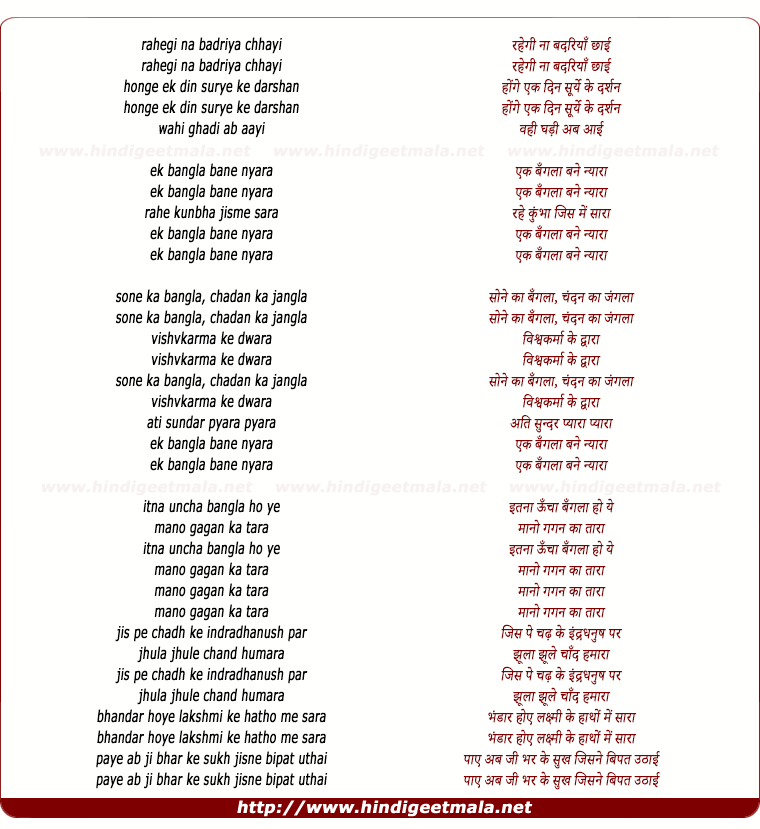 Comments on song "Ek Bangla Bane Nyara"
V. Siddhartha on Thursday, October 16, 2008
When one listens to Saigal, Pankaj Mullick, Jagmohan,Mukesh,
Lata,Suman,Sudha,Geeta, Asha,Rafi,Talat,Hemant and a few others in that old
constellation of divine singers, one has to say God is in His Heaven and
all is well with the world-- even if reality soon shatters such blissful
reveries. In that firmament, Saigal was like the North Star that other
singers took their direction from,consciously or not. I can't thank you
enough,Musique4ever, for spreading so much joy around.

ramaraksha01 on Sunday, April 13, 2014
We were a rich country before the British came - they looted us and left us
dirt poor - we have been poor so long we think that is how things are
supposed to be - I cry for the lost futures of so many of us - same
vultures strut around saying, "thou shalt not steal", "thou shalt not kill"
- Churchill let 3 million Indians starve to death in the early 40's, they
stole our wealth & our futures﻿

ramaraksha01 on Sunday, December 20, 2009
I love him too there's magic in his voice but I would go easy on conferring
on these guys - this was 1937 while he was making movies, young men were
giving their lives fighting for a free india. Even today i saw the
documentary on this guy who was risking his life trying to save children
from bonded labor - no awards for those but we are ready to give awards to
fake idols

Colonel Rao on Monday, October 31, 2011
Sadly Govt of India failed to recognise Saigal sahib who belonged to united
India.Many are given awards to appease a section while real deserving men
like Saigal and Surendranathji are neglected. It is time they are
recognized than the un deserving ones.

99farooque on Friday, January 18, 2013
dear sir, you r of my father's age ..but he is no more..he like K.L.Saigal
too, and i too very much fan of saigal sahab. i am agree with your comments
for birth day anniversary and postage stamps. thanks music4ever for
uplosding the song.