Video of this song from youtube
Average Rating : 3.71
Total Vote(s) : 7
Please rate this song between 1 star and 5 stars (5 stars being the best). Just move your mouse on the stars above and click as per your rating. Your rating will really help us to improve our website. 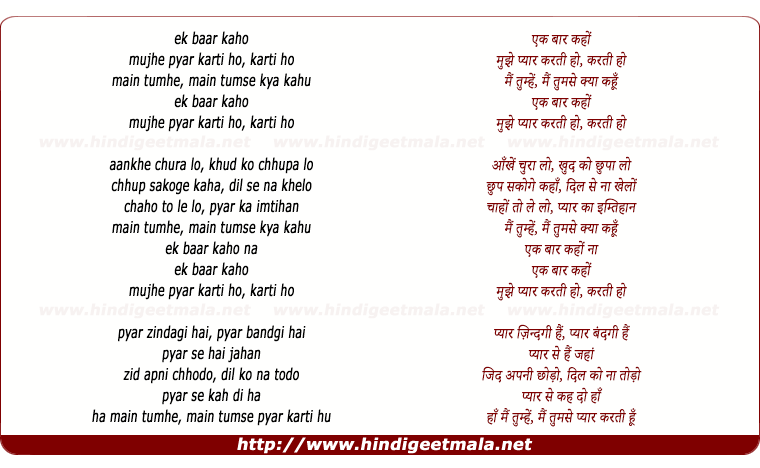 Comments on song "Ek Bar Kaho Mujhe Pyar Karte Ho"
annie19645 on Monday, January 03, 2011
This movie is from 1979 or 1980 and Anil Kapoor was also in this movie, i
just saw it yesterday, he was not the main lead though, his role was short
and interesting, he played a friend of Navin Nishchol, in those days Anil
was doing many small roles because he was a small star. Its amazing how far
Anil has come from those days, now he is doing Hollywood movies, he is in
Mission Impossible 4 with Tom Cruise in 2011, cant wait for that

richa laad on Thursday, June 24, 2010
awsome song.,very addicting..I like this one ..The singer is Vijay bendict
(I am discoo dancer ..fam) and picturised on anile dhavan & Kiran Vairale
.she still comes in some tv soup..I like 70-80 era song.i love them
everyday i like to listen them.

ourzzz on Tuesday, October 21, 2008
The girl in the song is not Shaban Azmi, but Kiran Varilai. And the guy is not Anil Kapoor but Dilip Dhavan. Kindly make the corrections.
sudhisira on Saturday, November 13, 2010
This is not Anil Kapoor. But he and Kiran Vairale did star in a Kannada
movie "Pallavi Anupallavi" around the same time. Listen to a lovely piece
"naguva nayana madhura mouna" from that movie. Beautiful song, with music
composed by Ilayaraja.

amberfort on Sunday, April 04, 2010
Movie was a copy of Come September and the guy is definitely david dhawan. The movie finds mention in the record book for being the first appearance of Anil Kapur though in a cameo. The girl is Kiran Vairale
View all 24 comments related to song Ek Bar Kaho Mujhe Pyar Karte Ho
Popular Links on HindiGeetMala