Video of this song from youtube
Average Rating : 3.91
Total Vote(s) : 58
Please rate this song between 1 star and 5 stars (5 stars being the best). Just move your mouse on the stars above and click as per your rating. Your rating will really help us to improve our website. 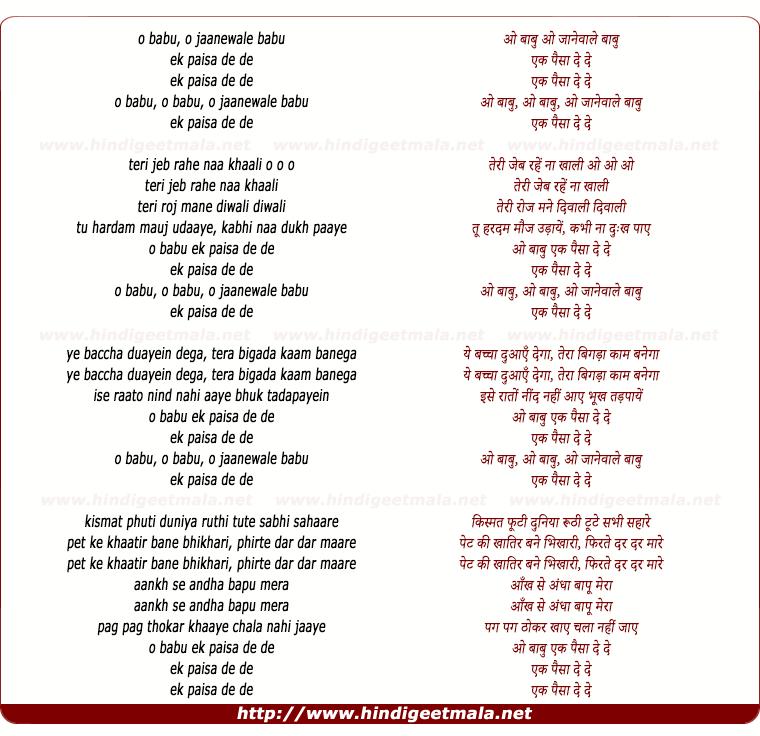 Thank you Rajiv ji for your uploads.﻿

macmu881 on Saturday, October 29, 2011
What a soul-stirring song by Mohd. Rafi picturised on a beggar, O babu o janewale babu ek paisa dede. Teri jeb rahe na khali, teri roj mane diwali, tu har dam mauj udai kabhi na dukh paye! What a travesty of fate, in India, our political class luxuriates in honey, milky and comforts of modern life, whereas a poor man continues to luxuriate in his toil of torture and wretched squalor, even today!
Nayan Yagnik on Friday, December 18, 2009
This was the first film of Composer Ravi. This song became the 'trade song'
of all the beggars, when the film was released in 1955. The song remained
the top favourite of all beggars till 1967, when it was replaced by another
Ravi/Rafi Combination of 'Dus Lakh'- 'Garibon ki Suno...-Tum ek paisa doge,
woh dus lakh dega'. Both the films were made by Late Devendra Goelji !


sureshshah3 on Tuesday, November 05, 2013
Rafi Saab's capabilities never required any good face on screen .Legend
could make the song popular with his expressions and melodious voice though
screened on a beggar & side actor.Hats Off to both Rafi Saab & M.D.Ravi.