Average Rating : 4.38
Total Vote(s) : 821
Please rate this song between 1 star and 5 stars (5 stars being the best). Just move your mouse on the stars above and click as per your rating. Your rating will really help us to improve our website. 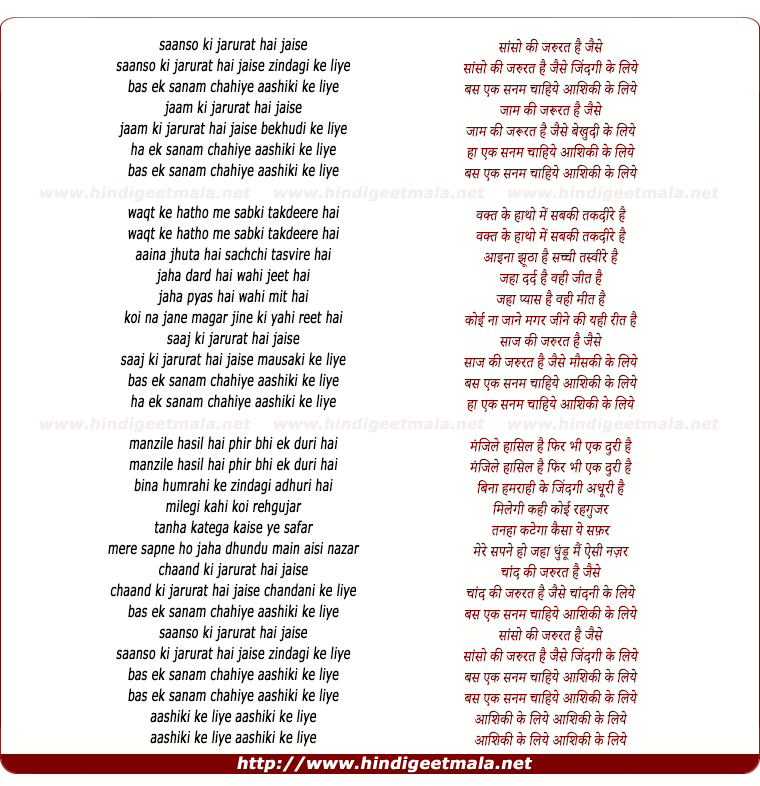 Comments on song "Sanso Ki Jarurat Hai Jaise"
Satish Nukala on Monday, January 25, 2010
That foggy screen to begin with...Rahul Roy on a chair..and the guitar
beats..then comes the voice of Kumar Sanu.what a song, this marked the
entry of Kumar Sanu's voice into the hearts of the nation!! This keeps
taking me back to my childhood days..and the music of Aashiqui is still the
one I prefer to listen than any other song...still fresh..and Sanu's voice
without the nasal touch is simply the best.

sani faheem on Saturday, May 19, 2012
this song really touches my heart my bro likes too much this beautiful song
bhai this is dedicated to u,u r not in this world now but your,s memories
always be in my heart as this memorable great song.sanifaheem

Sonny k on Saturday, March 14, 2009
i wish they made a remake with rahul roy and anu this movie made them both
stars i hope to see the whole cast together again i miss you rahul roy your
a star and kumar sanu had the best voice

blueinkbottle on Wednesday, March 28, 2012
GOD!!! Why could time not have stood still. long to go back to that
era...the early 90s... life was so simple, happy and uncomplicated back
then.