Average Rating : 4.36
Total Vote(s) : 80
Please rate this song between 1 star and 5 stars (5 stars being the best). Just move your mouse on the stars above and click as per your rating. Your rating will really help us to improve our website. 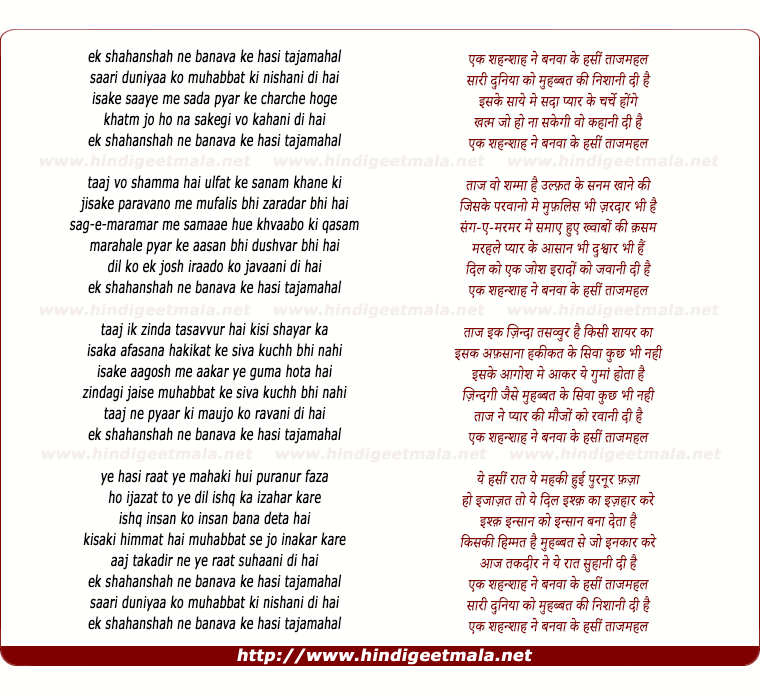 Comments on song "Ek Shahanshaah Ne Banavaa Ke Hasin Taajamahal"
Zil Hasnain Kazmi on Tuesday, June 28, 2011
Centuries will pass before other singers like Mohammad Rafi and Lata
Mangeshkar and actors like Dilip Kumar and Vaijaiyanti Mala, their calibre,
elocution and style will be gifted to this planet again.No body could ever
reach to their heights. Complete control in singing and phenomenal acting
and facial expression and dance, her unique blush facial expressions,
Dilips dashing personality, qualities of dexterity skills in crushing some
one is amazing. Is anybody you know could do?(28th June 2011)

Zil Hasnain Kazmi on Tuesday, June 28, 2011
Naushad Sahib was an original composer. Indeed he came with two tunes -
sa-re-ga-ma-pa-dha-nee-saa; then another tune-saa-nee-dha-pa-ma-ga-re-sa.
This is yet another master piece of Late NaushadSahib, he was really the
architect who made the routes for the flowing streams and rivers, with
their flowing came out the beautiful music that melts our hearts. Naushad
Sahib and Late Rafi Sahib both of them have passed away; I reckon it a
great loss. May God bless their soul?(28th June 2011)

Kala Dwarakanath on Thursday, October 29, 2015
This song reminds me of another soul-stirring song, Tu hai mera prem devta,
a devotional piece also in the same rag, from the 1960 movie, Kalpana. The
music was by the great O.P. Nayyar and sung beautifully by Manna Dey and
Mohd. Rafi.The scene is a mesmerizing classical dance featuring sisters,
Padmini and Ragini. Sad they are not with us anymore!﻿

raees rana on Thursday, May 02, 2013
this is either raag bhervi or darbari raag and very hard to sing, only very
skilled singers like rafi or lata could sing it and if you could have given
this song to proper classical singer like ustad amanat ali then it would be
even more melodious but you got to have that classical music interest

Jagjit Singh Ishar on Saturday, September 18, 2010
the gr8 stalwarts of Bollywood naushad shakeel mohd rafi lata mangeshkar.
an xclent composition of naushad sahib. i hv no words 4 rafi sahib & lata g
in their praise, its just lighting a candle b4 sun. its an evergreen gem.