Average Rating : 4.47
Total Vote(s) : 15
Please rate this song between 1 star and 5 stars (5 stars being the best). Just move your mouse on the stars above and click as per your rating. Your rating will really help us to improve our website. 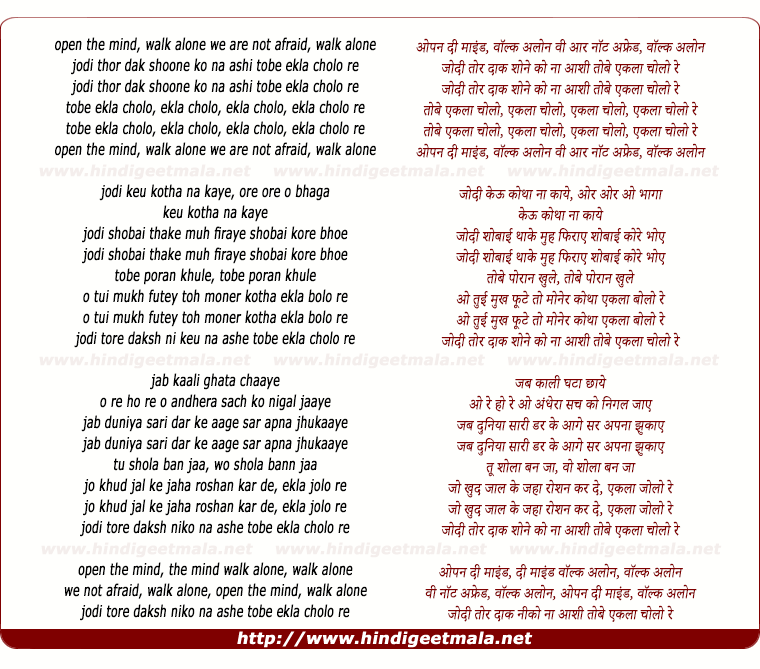 Comments on song "Ekla Cholo Re"
WeaponDesign on Sunday, March 25, 2012
Kolkata is actually a good city but is made worse by bad publicity. There
are always problems in big cities. When it comes to Mumbai, media shows
high rises and when Kolkata, media shows broken houses and poverty. In
reality Mumbai is much more crowded and people in Mumbai face more hard
life than Kolkata people. The way middle class in Mumbai whole family sleep
in one single room and travel in substandard travelling trains and busses,
Kolkata middle class cannot even dream.

Vivek Sisodia on Tuesday, March 27, 2012
If they answer not to thy call walk alone, If they are afraid and cower
mutely facing the wall,O thou unlucky one,open thy mind and speak out
alone.If they turn away, and desert you when crossing the wilderness,O thou
unlucky one,trample the thorns under thy tread,and along the blood-lined
track travel alone. If they do not hold up the light when the night is
troubled with storm, O thou unlucky one,with the thunder flame of pain
ignite thy own heart and let it burn alone

rahulram91 on Sunday, April 22, 2012
You are right to say that there isn't a contradiction in being Bengali and Indian. The Bengali culture is integral to integral to Indian culture. What most people here feel what was wrong with aryankma2011's comment is that he could have at least said that he is equally proud to be Indian and Bengali, why does his Bengali identity have to supersede the Indian identity? I am a Tamil Iyer, but always an Indian first. Jai Hind!
WeaponDesign on Tuesday, March 20, 2012
@princeyalin But for the Nation, Assam is not in list. Nation like India
being under congress for maximum life has spoilt the idea of unity. India
only develops certain states and others are neglected. Example Assam, West
Bengal and Chattisgarh are badly neglected by Central Government. If India
is one then why this partiality?